Spanish Town Hospital in dire need of upgrade - 1,145 surgeries recorded between January and March this year 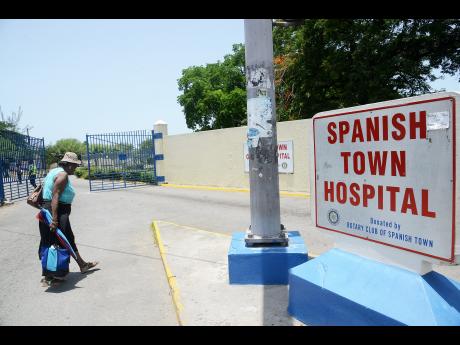 Norman Grindley
In this file photo, a woman makes her way across the entrance to the Spanish Town Hospital in St Catherine.

The urgent need for the Spanish Town Hospital in St Catherine to be upgraded to a Type A health facility was brought into sharp focus after a quarterly report by the Ministry of Health titled 'Vitals' revealed that the institution recorded the highest number of surgeries, 1,145, during the period January to March 2017.

The report also revealed that the St Catherine-based facility recorded the highest number of major surgeries, a total of 932; and emergency surgeries, which numbered 673.

Health Minister Dr Christopher Tufton admitted that there is growing demand in the area for surgeries and other services, and as a result, there is the crucial need to upgrade the institution to fill the gaps.

"It speaks to the importance of that belt and some of the discussions we are having in the future about upgrading from Type B to Type A, and Spanish Town being a key player there. It is justified based on the demand on the system along that stretch."

The minister says that work is under way to complete the upgrade negotiations as a contract has been signed and a team is expected to arrive next week to continue discussions.

"As it relates to the Spanish Town Hospital, again, the data clearly shows that there is a demand, and it is quite significant. It is one of four hospitals that we have identified for review and upgrade," Tufton said.

"So we anticipate that certainly before end of the financial year, I am hoping to have a report on Spanish Town, in particular, and others, too, as to what will be required. The plan is to upgrade that facility from a Type B to a Type A."