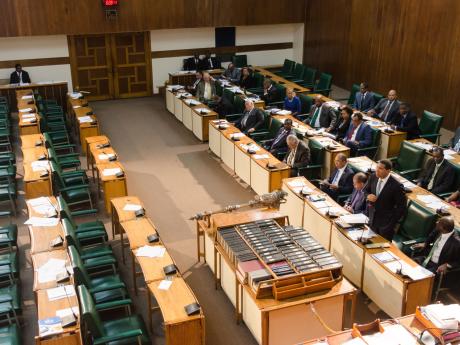 The Opposition members had failed to return to the House after an announced 20-minute suspension that turned out to have lasted for one hour and 27 minutes.

During the break Opposition Leader Dr Peter Phillips told a news conference that the Opposition would not continue the sitting.

"We don't find it possible to continue in the sitting of the House as it is being conducted," Phillips said.

Prime Minister Holness who had earlier piloted the NIDS bill had asked that the proposed law, which was sent from the Senate with 168 amendments be considered at a later date.

However, Phillips moved a motion calling for the bill to be withdrawn and referred to a joint select committee for further review.

This triggered an extended debate over parliamentary rules which led the acting leader of government business Everald Warmington to ask for a suspension of the sitting.

The government side hit back singing 'My leader born yah', in an apparent jab at the People's National Party who selected Dr Shane Alexis, a Canadian, to run in the St Mary South East by-election.

He was beaten by the Jamaica Labour Party's Dr Norman Dunn.

Meanwhile, Phillips said his reason for suggesting that the bill be referred to a joint select committee was to enable the consideration of the regulations which speak to data protection issues.

He said the bill was badly prepared and “badly considered”, noting that it contained 68 clauses had 268 amendments.

Later, Holness, in closing the debate on the bill, said the government had discussion with a team from the opposition who insisted that a mandatory clause be included in the NIDS law.

But the opposition has been complaining about the mandatory provision in clause 20 of the bill which forces people to register under NIDS or faced being fined.

According to Holness, when the opposition formed the government it had also included a fine of $100,000 for persons who refused to comply with the law.

“I am merely completing the several legs of the relay that the opposition started,” Holness said to loud applause from government MPs adding that his administration has amended the law to remove the punishment of imprisonment for breaches.

He insisted that a judge had the discretion not to impose a fine on persons who violated the law.

Holness also maintained that the legislation would not deprive Jamaicans of their rights, adding that his aim is to expand the rights of Jamaicans.

“We cannot continue to look at the Jamaican state as the enemy of the people. I am a strong advocate of preserving the rights of the people.”

He said a strong, honest state with integrity was needed to protect the privacy of Jamaicans.