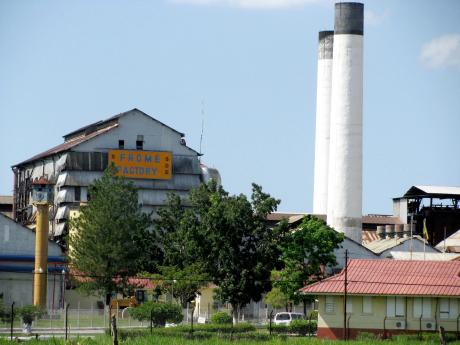 According to the Pan Caribbean Sugar Company (PCSC), one of the major players in the local sugar sector, a chronic shortage of cane cutters and the persistent plague of illicit cane fires could once again have a negative impact on the 2017-18 operations at the Frome Estate in Westmoreland.

The historic factory, which first started production on January 14, 1939, was sold to the Chinese in a multimillion-dollar deal during the 2009 government divestment of local sugar factories. However, despite an additional investment of a whopping US$100 million to upgrade the facility, the estate had its lowest output in history in the last crop year (2016-2017), which was an abbreviated one.

"We only got 100 cutters in the last crop, and that placed us at a disadvantage, because we need constant cane supplies if we are to turn these results around. There is very low employment, no one wants to work, and that is also a serious problem," said George Hong Guo, deputy chief executive officer of the PCSC.

"You will find a lot of the young generation sitting on the street with earphone music instead of doing some hard manual work, such as cutting cane. We now need to purchase two cane cutters at a cost of US$1 million, and this is certainly not ideal, especially when you are operating in a loss-making environment. While such equipment is necessary, because of the rainfall in the Frome area, we also need cane cutters, but can we force them to work? No, we cannot."

While PCSC boss Liu Chauyo said she would settle for 40,000 tonnes of sugar from 500,000 tonnes of cane consistently from the 60,000-tonne capacity Frome Estate, Hong Guo described the challenge of dealing with illicit cane fires as tantamount to a love affair in which only one person is making all the effort.

EVERYONE MUST PLAY PART

Hong Guo noted, "I understand the system, and in comparison to the Jamaicans, the Chinese are not good speakers. The two governments have a very good diplomatic relationship, and to be able to celebrate 45 years is a great achievement, but everyone must play their part for this relationship to work."

Regarding the illicit cane fires, he said, "We have done a lot to improve relationship with the communities, and have pleaded for help from the Government, through the security forces and the justice system, but nothing has really happened, but talk and right now it is very difficult."

According to Liu, who recently returned from China, where she met with her bosses to discuss the challenges facing the PCSC, the company will be maintaining the social programmes, which she hopes residents will begin to appreciate as part of the drive to forge a partnership with the communities.

"Jamaicans are diligent, brave and good people, but they must improve their legal awareness," said Liu. "When they are not happy, there is the tendency to sabotage whether public or private property, without considering that these properties are actually assets for Jamaica to help its economic development."