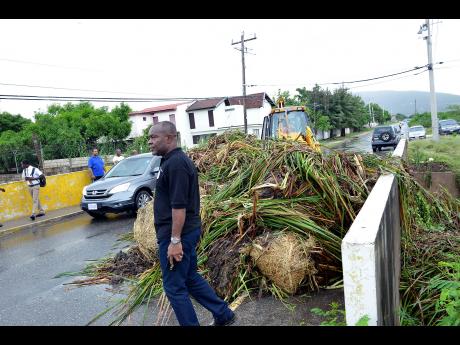 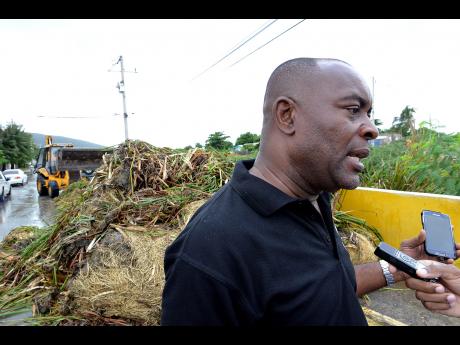 Norman Grindley
Mayor of Portmore Leon Thomas expresses frustration with the drainage system in the area.
1
2

Thomas, who visited both schemes, said that the Portmore Municipal Council (PMC) and the residents had written several letters to the HAJ, complaining about the flooding caused by incomplete and clogged drains.

The mayor stated that the council had recently advised the HAJ that the drain connected to the Westmeade Willows development could be cleaned for an estimated $3 million, but "they responded by sending $600,000".

Standing along Germaine Road, some metres away from the water-soaked Westmeade Willows community, Thomas told The Gleaner: "The drain for Portmore Vista in Gregory Park is a concrete drain that is very small, so it cannot carry the volume of water. It also runs nowhere because they only built it to a point. In Westmeade Willows, we've asked them to concrete the main drain, and they've refused to do it."

However, in a statement yesterday, the HAJ said: "A visit to the site indicated that flooding was due primarily to the general non-cleaning of the external drains, in particular, the exit of the drain. This drain has always belonged to the Municipal Corporation, and as such, is not the responsibility of HAJ."

Noting that the Westmeade housing scheme was a subdivision that they had done approximately four years ago, the HAJ said that in September, the municipality asked them for a contribution towards drain cleaning, and they obliged on September 18, with the clear understanding that "the drain belonged to the municipality, and the municipality, is responsible for cleaning same. The current flooding is not a result of anything the agency has done."

Mayor Thomas says that the PMC will not allow its citizens to suffer.

"Along with the National Works Agency, we're removing the blockage and overgrown vegetation from the mouth of the bridge (beside Westmeade Willows) so the water will flow from the community, but this is a temporary fix. If there's another similar downpour, the bulrush will flow again and it will clog the drain," Thomas explained.

Westmeade Willows resident Desmond Rose, who said that he purchased his two-bedroom house for $8 million in 2012, described the early morning flooding as "impossible".

A few streets down in the community, a young woman, who spoke on condition of anonymity, described how the waters breached her home.

"Dutty water come pon the verandah and seep through the door nasty up di whole place. Not even work me nuh go," she said.