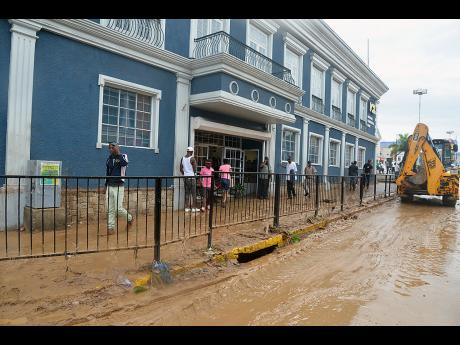 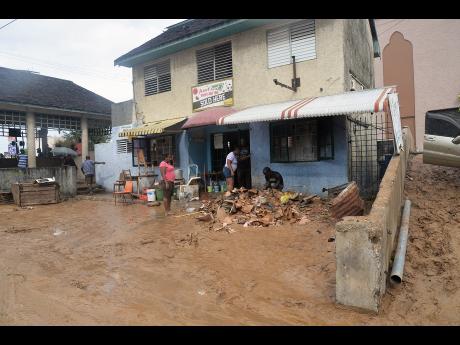 President of the Montego Bay Chamber of Commerce and Industry T'Shura Gibbs says that commercial activities in the tourist capital have been severely affected by the heavy rains, which, yesterday, left numerous streets and buildings under water, mud, and other debris.

"The impact on businesses has been severe. Montego Bay is now at a standstill. What we experienced in Montego Bay yesterday (Wednesday) was extraordinary. We are very concerned about our membership, which has been affected, and we are prepared to assist them in any way we can," Gibbs told The Gleaner.

"The rain and flooding were unlike anything I have seen before in the city. The focus now is on cleaning up and better understanding from an infrastructure perspective how we learn and better equip ourselves for any future disruptions of this nature."

When The Gleaner did a tour of the commercial zones yesterday, several prominent business operations in downtown Montego Bay, St James, were still assessing damage, with employees feverishly removing loads of silt from the properties.

Business activity was almost non-existent along the ever-buzzing Harbour Street as huge trucks collecting refuse from the flood waters dominated the area. Items of clothing from stalls in the Old Shoes Market and the Peoples Arcade were strewn along the waterfront, adjacent to the pier, as vendors tried to salvage what they could of their investment.

Gibbs was not pleased with the lack of police presence in the business district during the heavy downpour, charging that the cops must be equipped for any eventuality.

"There was lawlessness on the part of the drivers, but if we had our officers on the ground, it would have made a huge difference to ease the congestion somewhat."

The chamber president added: "It is cause for concern because I don't know that we have the capacity in the police force here in St James to respond to emergency situations akin to the one we saw last night. Our officers must be out when the citizens are out to give support."

In a release, NCB said its St James Street branch was closed yesterday due to the flooding. Directing customers to online and other locations, they advised that they would provide further notice re reopening.