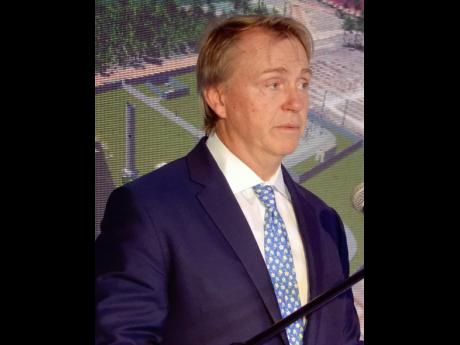 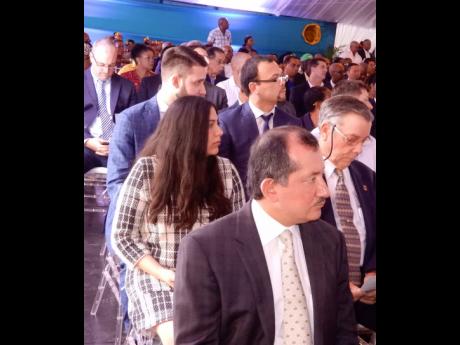 A section of those who turned out for the groundbreaking ceremony.
1
2

Ground was broken yesterday at the Jamalco for New Fortress Energy gas-fired heat and power plant. The project is the result of a partnership that signals the beginning of great things for the job market and the parish of Clarendon.

The project will see over 400 persons being employed during the construction, which is expected to be completed by the first quarter of 2019.

Elaborating on the partnership, Prime Minister Andrew Holness shared that the major components of the project would include a floating storage and regasification terminal in the Portland Bight Protected Area, the installation of a pipeline from the Rocky Point port to the Jamalco refinery, as well as the construction of the natural gas-fired power station at the Jamalco location and construction of an electricity distribution network to deliver power to the national grid.

"This development signifies the power of win-win partnerships with the benefits for Jamalco, including reduced cost, as well as increased reliability and efficiency," Holness revealed.

Jamalco will not be the only beneficiary of the new plant to be built as Holness said that the Jamaica Public Service would also benefit through the power-purchase agreement, yet to be negotiated. Jamaica will also see benefits, with reduced emissions.

Speaking on the business aspect of the plant, Wesley Eden, chairman and founder of New Fortress, said that about two-thirds of the electricity created would be sold to the grid, with the remaining third being sold in steam at a very low cost, which translates to the plant being "very, very competitive".

"The more competitive it is, the bigger it can get, the more people it can hire. This will move this plant into the top 25 percentile in the world in terms of its dispatch order," Eden said.

Jamaica has been criticised for the many headaches associated with conducting business, but Eden had high praises for the regulatory agencies as he said, "You usually don't find people like me applauding regulatory agencies, but this has been by far the best regulatory environment that I've dealt with in trying to get to the right answer."

Holness elaborated by saying that the time had come to focus on making the process of doing business easier for investors.

Upon completion, the plant will run on natural gas and ensure that Jamalco has cheaper fuel.