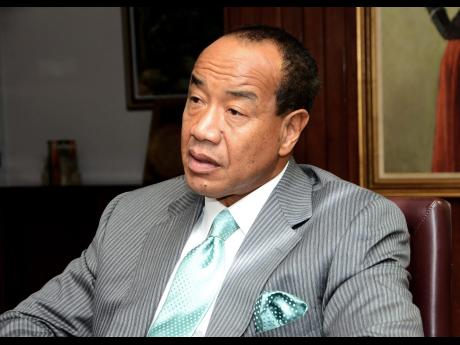 Businessman Michael Lee-Chin has served notice that he intends to submit to arbitration a claim against the government of the Dominican Republic seeking to recover more than US$300 million in damages for expropriating his investment in that country.

The notice was filed on Tuesday, and there is a cooling-off period of 90 days for the government to either settle or be subjected to arbitration either in Washington or Brussels, Lee-Chin advised The Gleaner.

The notice of controversy concerning the investment was made pursuant to the Caribbean Community Free Trade Agreement between the Dominican Republic and Jamaica signed in August 1998 and entered into force in February 2002.

The Embassy of the Dominican Republic declined to comment when contacted by The Gleaner yesterday.

According to the notice, a copy of which has been obtained by The Gleaner, Lee-Chin's investment in the Dominican Republic was made through the purchase of his interest in the Lajun Corporation, a company incorporated in that country, the acquisition of approximately 875,000 square metres of land to be used as a sanitary landfill, recycling facility, and, ultimately, a waste-to-energy plant, and a concession agreement awarded by the municipality of Santo Domingo Norte (ASDN) to Lajun on March 1, 2007, for the maintenance and operation of the landfill for 10 years.

Lajun's shareholding is 50 per cent, held by Nagelo Enterprises, a Panamanian entity, and 50 per cent by Wilkison Company, a Dominican Republic entity. Nagelo Enterprises and Wilkison Company both hold title to the land, while Lee-Chin is the majority shareholder and ultimate beneficiary of both entities, and through them, holds 90 per cent of the beneficial interest in Laj?n and the land.

According to the notice, filed by international arbitration attorney Richard Lorenzo C. Lorenzo of the Miami, United States-based Hogan Lovells, since 2013, Lee-Chin has invested in a waste-management facility in Santo Domingo Norte, servicing ASDN and adjacent municipalities, among other users.

He is contending that the multimillion-dollar investment was made with the understanding that a treaty prohibiting wrongful and uncompensated expropriation and guarantying fair and equitable treatment to foreign investors existed between Jamaica and the Dominican Republic and would be respected.

The concession agreement provided that Lajun could charge users a tipping fee, starting at US$2 per ton of waste disposed by Lajun, and eventually, could also charge users for the energy generated by the waste-to-energy plant. In exchange, ASDN would enjoy the services rendered by Lajun to dispose of its waste free of charge and would obtain 35 per cent of all profits Lajun earned from the waste-to-energy plant operation.

Pursuant to the concession agreement, the tipping fee was to be reviewed and revised twice a year.

The notice said that those expectations and rights were repeatedly ignored and violated by the State, which made every effort to expropriate the investment, including compelling Lee-Chin to operate the concession without the benefit of tipping fee adjustments, taking possession of the land, and expropriating the project.

The notice said that in July 2013, within days of Lee-Chin purchasing his interest in Lajun and the land, ASDN unilaterally terminated Lajun's operation with the assistance of the State's military, forcefully taking possession of the land and taking over the management of the landfill without just compensation.

Lee-Chin is contending that because of the Dominican Republic's violations of its treaty obligations, he has suffered, and continues to incur, significant financial and moral damages.

As a result, he is claiming an amount of damages in excess of his initial US$300 million estimate, exclusive of interest and costs.

That includes compensatory damages for, among other things, the expropriation of his investment, lost profits, including those he should have earned had Lajun been able to charge a fair tipping fee for the duration of the concession agreement through 2034 and those he should have earned from the waste-to-energy plant to be developed per the terms of the concession agreement.

He is also claiming for lost business opportunities, incidental damages, and moral damages resulting from what he says are the State's wrongful acts.