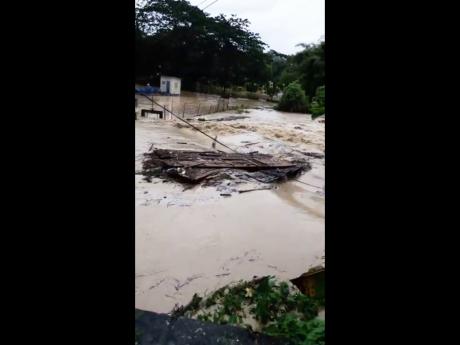 Contributed
Rafts that were secured on the bank of a section of the Martha Brae River were washed away.

A number of areas in north Trelawny were flooded yesterday as a result of rains associated with a cold front affecting the island.

The main road in the vicinity of the Long Pond sugar factory and the main road at Southfield near the now-closed Parchment Block Factory between the communities of Perth Town and Martha Brae were impassable. The Martha Brae River overflowed its banks, resulting in rafts being washed away from Rafters Village.

The main junction in Jackson Town, the road leading from the south of the parish and the road from Stewart Town were rendered impassable. Flooding even affected business at the tax office.

The mayor of Falmouth, Colin Gager, attributed the flooding to blocked drains.

"Some of the flooding ... seems to be because of the blocked drains, but it is on the main road, and you know the local authority doesn't have control over that. In Jackson Town, it is really blocked drains. You need something to clear these drains."

He, however, noted that he would be contacting the National Works Agency and would be partnering with them as the safety and free movements of the parishioners were very important

Meanwhile, the Jamaica Public Service Company (JPS) is reporting that high winds and flooding associated with the cold front has resulted in power outages in Trelawny and St Ann. The areas in Trelawny that are affected include Top Trelawny, Duanvale, and Stewart Town. Flooding has also prevented personnel from being able to commute to work, resulting in the temporary closure of the Bill Express section of the JPS customer service office in Falmouth, the light and power company reported.

The JPS said that its crews were working to restore power as quickly as possible.