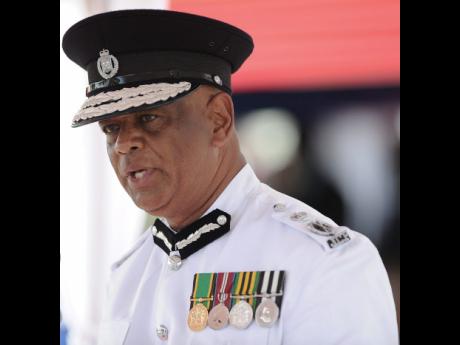 Police Commissioner George Quallo has pointed the finger at Superintendent Robert Walker, commanding officer for the Kingston East Police Division, claiming that his "lack of diligence and proper management" was one of the reasons for the traffic gridlock that shut down access to the Norman Manley International Airport (NMIA) for up to eight hours on New Year's Day.

The police chief found, too, that rowdy patrons attending the popular party Sandz, as well as "touts" and "hustlers" who were directing them to park outside the 7th Harbour Beach Park, where the event was held, were to blame for the pile-up of traffic along the Palisadoes main road leading to the airport.

The findings were contained in the leaked six-page report Quallo submitted to Minister of National Security Robert Montague on the weekend.

Quallo cleared police commanders of any irregularity in the issuing of the permit to the promoters of the party, but acknowledged that police personnel underestimated the volume of vehicular traffic to plan for, as well as "the size and behaviour of the crowd".

"The policing at the initial stage [of the party] was not as decisive due to the quality of the supervision and management," he wrote in the report.

Quallo singled out Walker, who was the gold commander for the operations, and Assistant Superintendent Keisha Scott, the silver commander, for criticisms and indicated what action they would face.

"It appears that the divisional commander [Walker] may be faulted for the lack of diligence and proper management at the point of execution and, to that end, the Police Service Commission will be consulted on the issue of accountability," he wrote.

In the case of Scott, the commissioner said she will be "exposed to additional training", especially in command and control for major events. In addition, her "shortcomings" will be outlined to her in a letter.

Scores of motorists, including the flight crew for at least four international airlines and other persons trying to catch flights out of the island, were stuck in traffic for up to eight hours as rowdy patrons attending the Sandz party spilt out on to the Palisadoes main road.

The incident, described by Quallo as embarrassing, prompted National Security Robert Montague to demand an explanation.

The police chief confirmed, in the report, the person who applied to the Kingston and St Andrew Municipal Corporation for the licence for the event is a member of the Jamaica Constabulary Force. "[Name withheld] was referred to the assistant commissioner of police in charge of administration to determine whether he received the approval of the Police Service Commission to be engaged as a promoter," Quallo wrote.

He revealed, too, that Superintendent Courtney Coubrie, who was the commanding officer for the Police Traffic Division on the day of the party, will have to explain how police personnel, motorcycles and cars "under his command were deployed without his knowledge or approval".

According to Quallo, 27 police personnel were deployed to the venue of the party, including 16 from Coubrie's division and 11 from the Kingston East division.