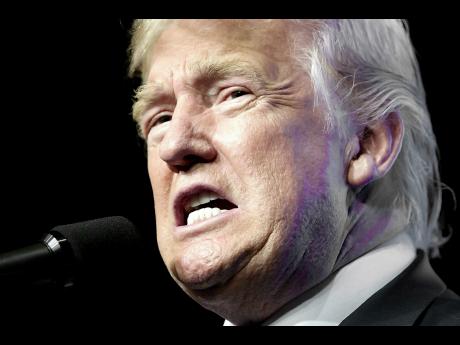 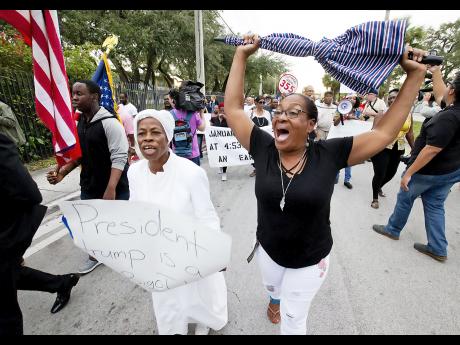 AP
Haitian-Americans Jocelyne Pierre (left) and Yanick Gorneo (right) during a march to commemorate the eighth anniversary of the Haitian earthquake, used to denounce President Trump.
1
2

The Caribbean Community (CARICOM) has ditched diplomacy and reacted with anger over recent comments allegedly made by United States President Donald Trump in which Haiti, El Salvador and African countries were described as 's...holes'.

According to the CARICOM Secretariat, the regional grouping is deeply disturbed by reports about the use of derogatory and repulsive language by the president to the United States in respect of its member state, Haiti, and other developing countries.

"Of additional concern is this pattern of denigrating Haiti and its citizens in what seems to be a concerted attempt to perpetuate a negative narrative of the country."

The CARICOM Secretariat said the regional bloc views "this insult to the character of the countries named and their citizens as totally unacceptable.

"We are especially saddened that such narrative emerged around the time of the anniversary of the devastating 2010 earthquake which took so many lives of citizens in that country," added the secretariat, as it endorses the response of the Haitian government.

The Haitian government had said it was "deeply shocked and outraged" by the vulgar remark which it called "racist".

"These insulting and reprehensible statements in no way reflect the virtues of wisdom, restraint and discernment that must be cultivated by any high political authority," said the Haitian government in a statement.

In the meantime, Vice-Chancellor of the University of the West Indies, Professor Sir Hilary Beckles, also reacted angrily to the slur.

He argued that the democratic, nation-building debt the American nation owes the Caribbean, and the Haitian nation in particular, is not expected to be repaid but must be respected.

"The president's truth-making troops might not know, and probably care little for the fact that Haitian people were first in this modern world to build a nation completely free of the human scourge of slavery and native genocide.

"It might be worthless in their worldview that Haiti's leadership made the Caribbean the first civilisation in modernity to criminalise and constitutionally uproot such crimes against humanity and to proceed with sustainability to build a nation upon the basis of universal freedom," said Beckles.

"The USA, therefore, should daily bow before Haiti and thank it for the lessons it taught in how to conceptualise and create a democratic political and social order," said Beckles.

"Haiti was and will remain this hemisphere's mother of modern democracy; and the Caribbean, the cradle of the first ethical civilisation.

"For President Trump, therefore, to define the Caribbean's noble heroes of human freedom, whose sacrifice empowered and enlightened his nation in its darkest days, as a site of human degradation is beyond comprehension. It is a brutal bashing of basic truths that are in need, not of violation, but celebration," added Beckles.

Last Friday, Trump denied making the comment, with conflicting reports out of a meeting in which he rejected a bipartisan deal on the Deferred Action for Childhood Arrivals programme.

But there had been no denial from a White House spokesman when he was asked about the widely publicised comments.