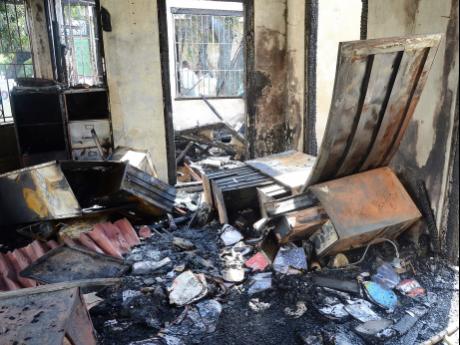 Kenyon Hemans
This was the scene at Walker's Place of Safety on Lyndhurst Crescent, St Andrew, after a late-night fire destroyed the facility, killing two wards of the State. 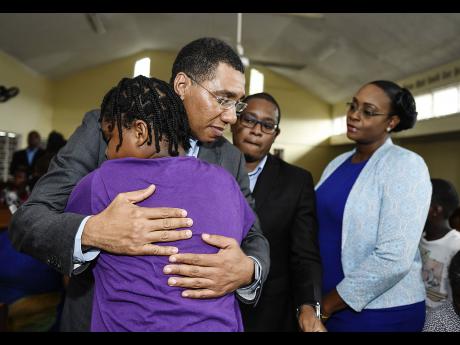 Gladstone Taylor
Prime Minister Andrew Holness comforts a girl, as Minister of State in the Ministry of Education, Youth and Information Floyd Green and the prime minister's wife, Member of Parliament Juliet Holness, look on. 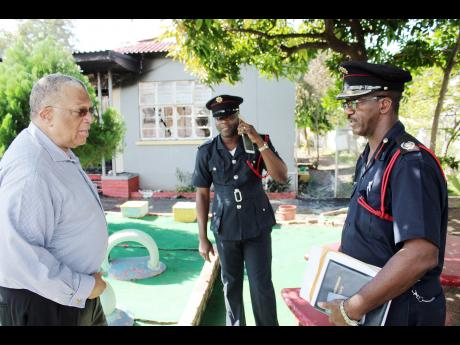 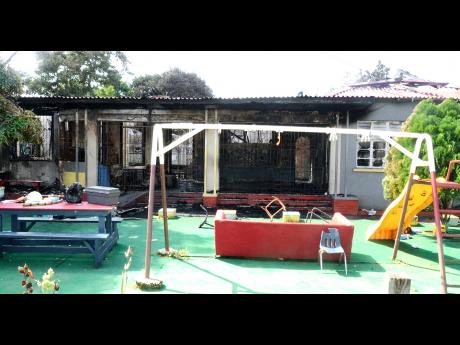 Kenyon Hemans
The remains of the playground.
1
2
3
4

A caregiver at Walker's Place of Safety for seven years, Jacqueline Gutzmore, was a dejected woman yesterday morning as she stared into space for long periods nearby the premises of the fire-gutted facility at the intersection of Lyndhurst Road and Lyndhurst Crescent in St Andrew. The tragedy was just too much.

"I was upstairs with the boys when I saw smoke coming through the window, suh mi jus' start, m' nuh hitch at all," Gutzmore said, indicating that she immediately began to evacuate the 19 boys and 17 girls at the institution.

"It was just horrible. It was a nightmare."

Not all were saved, as 12-year-old Anika McCrea and 16-year-old Annakay Moreland perished in the blaze that started minutes before midnight on Monday.

Authorities are yet to determine the cause of the fire.

Following the tragedy, the wards of the State were temporarily moved to the Shiloh Apostolic Faith Tabernacle Church on Lyndhurst Road.

However, state minister in the Ministry of Youth, Floyd Green, said the ministry has identified accommodations across the Corporate Area for the 34 wards, who were being relocated yesterday.

Green stated that the main focus was to provide counselling for the children, while also indicating that the same support has been made available to the families of the deceased.

"A number of private companies have called. We have actually set up a donation centre for people who want to give, and we continue to appeal to well-thinking Jamaicans to join us. The children lost everything, and we're going to put them in a position so that they can get back to school as quickly as possible," said Green during his visit with the children at the church.

"As quickly as they can get back to normalcy, the easier it is to get over the trauma. We're going to continue to work with them in terms of the psychological needs. It's a challenging time, but I think it's time we see the best of Jamaica."

Walker's Place of Safety served as a transitional residence for children, generally up to 12 years old, who have been abandoned or removed from their homes because of unstable conditions.

It provided food and shelter, along with access to educational services and health care.