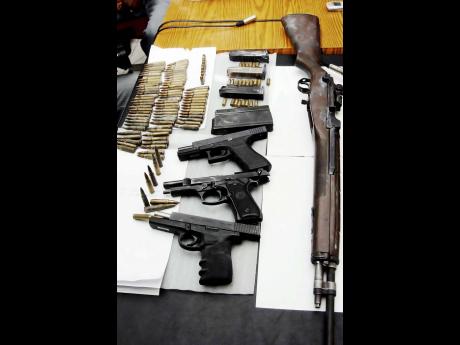 Dozens of persons who were convicted for illegal possession of guns and ammunition in St James and three other western parishes last year got off easy, as High Court judges opted for suspended sentences and fines as low as $70,000, an explosive document compiled by the police has revealed.

In one case, a St James man, convicted for illegal possession of firearm and ammunition, was admonished and discharged. In several other cases, judges opted for probation orders.

The document cited 35 cases that were disposed of in the circuit courts in Trelawny, St James, Hanover, and Westmoreland.

The most severe punishment, it showed, was a five-year sentence handed down in the Western Regional Gun Court.

According to police statistics, more than 570 persons were killed across the four parishes last year, including a record 335 in St James. The police say approximately 80 per cent of those killings involved the use of a firearm.

Furious investigators blasted the actions of the judges cited in the document and demanded that it be brought to the attention of the Andrew Holness administration.

"Based on our investigations, it is very clear that there is a direct link with most of these firearms [in the cases cited] and most of our crime scenes within the Area [Four Police Division]," one top investigator complained.

"Even though we fully recognise the independence of our judiciary, we are very concerned about the effectiveness of these sentences being handed down by the respective judges. In light of this, I am requesting that our concerns be raised with the appropriate ministry."

The six-page document indicated that at the higher end of the scale, four persons were sentenced to four years at hard labour, three to three years, while three others got two years.

"St James is the most murderous [police] division in the country, and five years is the highest sentence handed down," declared one senior investigator, who warned that the punishments being imposed by judges are dampening morale.

Morrison ignited a firestorm of criticisms on Monday after he sentenced three men held with 18 guns and nearly 1,400 assorted rounds of ammunition in Portland nearly five years ago to five years in prison for each firearm, and four years for illegal possession of ammunition, all to be served simultaneously.

Not to be outdone, the document revealed that in July last year, Justice Vivienne Harris opted to impose probation orders or supervised release for two and three years, respectively, as punishment for two men found guilty of illegal possession of firearm and ammunition.

Last January, a St James man was admonished and discharged by Justice David Fraser, who, days later, imposed a sentence of four years at hard labour, all for the same offence of illegal possession of firearm and ammunition, the document revealed.