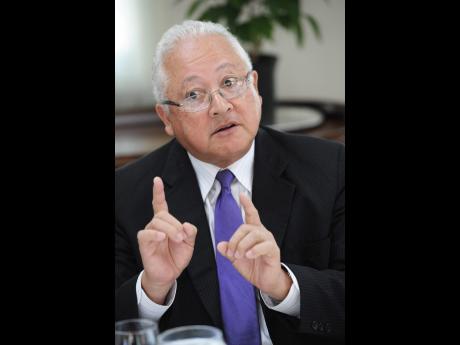 Justice Minister Delroy Chuck has admitted that he has concerns about the disparity in the punishment being handed down by High Court judges even as one of the country's top attorneys rushed to their defence.

"There needs to be greater consistency by judges," Chuck insisted yesterday.

But top criminal defence attorney Valerie Neita-Robertson has dismissed the criticism as unfair, pointing out that in most cases, "there are reasons for the sentence" handed down by judges, who are well trained.

As an example, Neita-Robertson said that the woman who was admonished and discharged by Justice David Fraser in the Western Regional Gun Court last January was a German tourist who had the firearm in a bag that belonged to her husband and "she was not aware of it".

"She took up the bag and travelled to Jamaica with it. You want to send her to prison for that?" the attorney questioned.

An explosive document compiled by the Jamaica Constabulary Force (JCF) has revealed that dozens of persons who were convicted for possession of illegal guns and ammunition in St James and three other western parishes last year got off easy as judges opted for suspended sentences and fines as low as $70,000.

In one case, a St James man, convicted for illegal possession of firearm and ammunition, was admonished and discharged, while in other cases, persons were released on probation.

The JCF document cited 35 cases that were disposed of in the circuit courts in Trelawny, St James, Hanover, and Westmoreland.

"Even though we fully recognise the independence of our judiciary, we are very concerned about the effectiveness of these sentences being handed down by the respective judges," one senior investigator chided.

But Neita-Robertson fired back at the police, saying that their criticism was unfair and gave the public the impression that judges were not performing adequately.

She insisted, too, that sending more persons to prison cannot solve the country's crime problem.

"You know what can reduce crime? The public becoming more cooperative with the police in reporting matters, and the police themselves must do better investigations," she asserted.

"We all have responsibilities, and we must stop pointing fingers and do what we need to do to get the crime level down. We don't need to panic and point fingers. That's not helping anybody."

The justice minister indicated that he had not seen the document but made it clear that the punishment imposed on persons convicted for gun offence should serve as a deterrent to others.

"Sentences should be able to send a strong signal to society about the repugnance of criminal activities," Chuck told The Gleaner.

He confirmed that the issue of sentencing would be on the agenda when he meets today with members of the National Council on Justice, which includes Chief Justice Zaila McCalla, Director of Public Prosecutions Paula Llewellyn, the police, and president of the Jamaican Bar Association Jacqueline Cummings.

Chuck revealed, too, that new sentencing guidelines for judges would be launched tomorrow.

"By putting guidelines in place, we will be able to bring judges into a more consistent pattern," Chuck said.