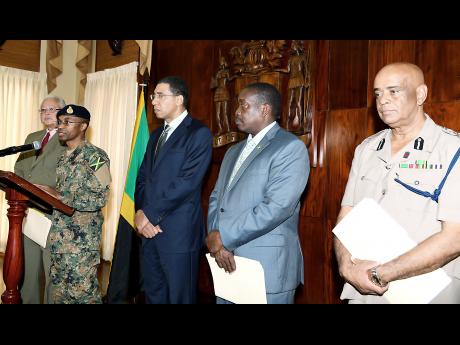 Targeting criminals and their facilitators, the Andrew Holness administration declared a state of public emergency for St James, the parish that recorded frightening levels of murders in 2017, numbering a record 335.

The prime minister made the announcement at Jamaica House yesterday afternoon, but hours before that, a strong detachment of personnel from the Jamaica Defence Force and the Jamaica Constabulary Force had already penetrated volatile communities in the crime-torn parish.

The national reserves have also been called out, and additional troops have been deployed to St James.

Under the state of public emergency, members of the security forces will have extraordinary powers and some rights will be suspended.

"This does not mean that the use of these extraordinary powers can be arbitrary or are beyond review," Holness said.

He stressed that the declaration did not mean that the rule of law was suspended.

"The security forces are expected, and have been directed, to treat citizens with respect and protect the dignity and safety of all," he noted.

The prime minister was at pains to point out that the operations of the security forces would cause some level of discomfort but asked citizens to cooperate with the lawmen.

Quizzed as to why it took so long to declare a state of public emergency in St James, Holness said that while the Government was contemplating this move for some time, it could not be carried out in an arbitrary way, noting that it required a "great deal of planning" and resources.

"I believe that we are now at a point where the actions are now aligned with resources," he added.

Commissioner of Police George Quallo said the security forces were intent on disrupting the activities of the gangs and restoring peace and the rule of law to the parish. He said that the police would be going after wanted men and targeting guns.