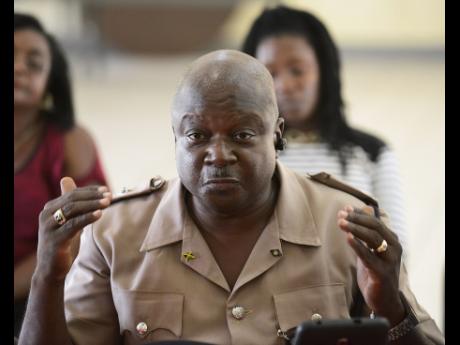 Houses operating as gun shops, firearms and ammunition being sold from the trunks of cars in the Savanna-la-Mar Bus Park, and boats taking guns into the parish, docking near Wharf Road in Smithfield on a monthly basis, are just some of the allegations of residents of Westmoreland.

But despite their fears, none of the residents seem prepared to share the information they have with the police.

"I'm new and you have not told me," declared head of the Westmoreland police Superintendent Lanford Salmon as he listened to the allegations of residents during a Gleaner Crime Forum at the Sean Lavery Centre in Savanna-la-Mar last Thursday.

"Provide me with the information and test me," added Salmon, reacting to a claim that the police have been told about the gun running in the past and have done nothing.

Salmon said that while he had information about thriving gun businesses operating in the parish, the specific locations are unknown to the police.

But one resident, whose name is being withheld, was adamant that there are members of the Westmoreland police well aware of where the guns are bought and sold as they are heavily involved.

"There are certain houses in the parish that are like a gun shop, and there are police officers who are aware of these things," asserted Tom Brown*.

"Some of the upstanding officers in the force are afraid of the other officers who are involved in these things. When a person can say to you that 'even at the bus park, a car will pull up there and have guns selling in the trunk, and the gun is being referred to as shoes, but most of the people around know that is not literal shoes, but is gun,' that's frightening," said Brown.

He was supported by another resident, whose name is also being withheld.

"I live on Wharf Road, and every time a shipment of guns a come in a di place, I can tell you, and I've told the police before, so it's beyond belief. Every end of the month, at least one shipment comes in," said the resident, who made it clear that he had not shared the information with Salmon.

"Every month end, a boat of gun come and dem take back food (money) carry go wherever. I'm not guessing. I know for a fact. The last time was before Christmas when the vehicle come in a di morning then come back at about 11 o'clock in the night," added the resident.

The disclosures were equally alarming to Member of Parliament for Central Westmoreland Dwayne Vaz and Mayor of Savanna-la-Mar Bertel Moore.

According to Vaz, he is unaware of the whereabouts of these gun shops, while Moore said that he did not know about this and was shocked by the revelations.

Salmon, who took command of Westmoreland in August, was adamant that the monthly shipping of guns has never been brought to his attention.

He told the forum that ridding Westmoreland of illegal firearms was an immediate focus.

The parish recorded 148 murders last year and 11 persons killed so far this year. The long-standing residents of the once peaceful parish have demanded measures to stem the bloodshed.

In 2014, there was a massive outcry in Westmoreland and expressions of fear as the parish recorded 51 murders. Since then, there has been a steady increase in the killings, which reached a record 148 last year, the majority committed with guns.