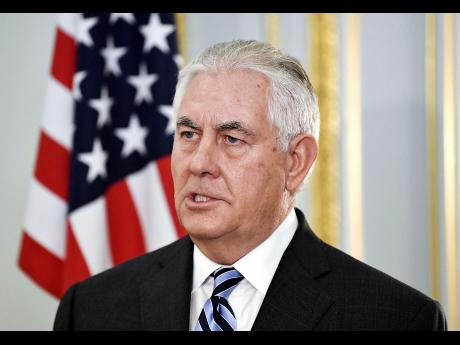 Prime Minister Andrew Holness has been urged to be strong in advocating Jamaica's foreign-policy positions in relation to crime, climate change, border security and trade arrangements, when the United States Secretary of State Rex Tillerson visits next month.

Tillerson, who is expected to travel to Kingston on February 7, is likely to engage regional partners in dialogue to promote a safe, prosperous, energy-secure and democratic hemisphere. His visit comes on the back end of a whistle-stop tour that will see him travelling to Mexico, Argentina, Peru, and Colombia.

However, while noted for his extensive experience in the energy sector as a former executive at oil giant Exxon Mobile, Jamaicans in the diaspora are hoping that this trip will take on additional meaning.

North East US Diaspora Advisory Board Member Akelia Lawrence-Maitland told The Gleaner that Tillerson's visit comes at a time when the Donald Trump administration is contemplating slashing the State Department's budget, as well as the US assistance programme USAID (United States Agency for International Development), to beneficiary countries.

"I am hoping that Mr Holness will be decisive in presenting Jamaica's position on important matters such as Venezuela, Caribbean security, immigration reform in the US and the likely impact it will have on developing countries," said Lawrence-Maitland.

"In addition, Trump's 's...thole' comment deserves further clarification, as Jamaica cannot appear to distance itself from Haiti or Africa," she noted.

Meanwhile, professor of political science at Monroe College in New York, Basil Wilson, said that the focus must be on pressing the US for more support in the anti-crime effort.

He reasoned that Jamaica's proximity to the US acts as a third border, as it is being used as a trans-shipment point for contraband entering the US and for guns coming into Jamaica.

"The prime minister should tell Tillerson, in no uncertain terms, about the impact that guns, which can be traced to the US, have been having on our people and insist on further steps to eliminate this," Wilson stated.