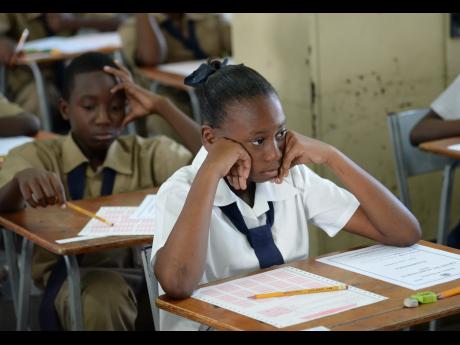 File
Two students of the Central Branch All-Age School in a pensive mood before the start of the 2016 GSAT. Next year, it is the PEP that other grade six students will face.

A serious fear of the unknown is how some educators have described the pending transition from the Grade Six Achievement Test (GSAT) to the Primary Exit Profile (PEP).

According to the educators, during a series of consultations they found that a number of parents remain fearful, while several teachers are still trying to understand the process.

Christopher Wright, principal at the Holy Family Primary School in Kingston, said his focus now is to try, as best as possible, to ease the tension among parents and students.

"The PEP is creating a little stir as it relates to what will happen and how it will be done. We had a parent consultation yesterday (Wednesday) and a parent-teacher consultation last week, and some of the parents are still not getting it and they are a little anxious about it," Wright told The Sunday Gleaner.

"The unknown is always going to be scary, and so we are trying to give as much information as possible in the best way we can, to let them know that there is really nothing much to worry about. Over time, I think they will get it."

Wright has endorsed PEP, arguing that it is more holistic in comparison to the GSAT as it provides an avenue for students to think creatively.

"You will still have the heavy competition for the traditional high-school places, with some children not being able to match up, so that will not be eliminated as far as I am concerned.

"I think I like where it's going, however, because it gives children who are not so strong with academics an opportunity to get involved in the creative side of the curriculum," added Wright.

Carol Clarke, principal of the Toll Gate Primary and Infant school in Clarendon, agreed that there is some anxiety surrounding PEP, but said the staff and students are trying their best to adjust as quickly as possible.

"We have a very brilliant group of grade five going in for PEP. They did very well in the Grade Four Literacy Test. However, the students are new to PEP, the teachers are new and the principal is also new, so we are all learning together. We are trying to adjust to what was to what is," said Clarke.

"What I do know is that the children will get to explore and they will get to do a lot more than what they would normally do."

Counselling psychologist and radio host, Joan Pinkney, said anxiety is a natural reaction, but advised parents and teachers to create an environment that will promote confidence and growth.

"Generally speaking, anything that persons have to face that is new will bring some kind of physiological reaction. From a psychological perspective, they are going to feel afraid and tense, even when it's a positive change," Pinkney told The Sunday Gleaner.

"The environment has to provide some stability and lack of stress," added Pinkney.

Education Minister Ruel Reid has repeatedly argued that all will be in place for the first staging of PEP, which consists of three components: a Performance Task, an Ability Test and a Curriculum Based Test.

The Performance Task consists of real-world scenarios that will require students to apply their knowledge and skills from mathematics, science, language arts, and social studies.

The PT will be administered in grades 4, 5 and 6 within the students' classroom by their teacher.

The Ability Test requires students to read analytically and use quantitative reasoning skills in responding to items.

The Curriculum Based Test will assess grade 6 content only, in the areas of mathematics, science, social studies and language arts. This test will consist of multiple choice items along with other item types, with the first staging being in April next year.

Students who were in grade 3 last year will be the first cohort that will have a complete PEP profile generated.