Nigel Clarke on a mission! - Soon-to-be-JLP candidate wants to advance quality of life 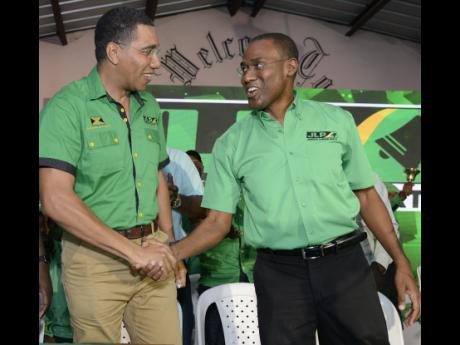 Ian Allen
Prime Minister Andrew Holness (left) congratulates Dr Nigel Clarke on being chosen to be the caretaker for the St Andrew North West constituency during a National Executive Council meeting at the Pembroke Hall Community Centre on Sunday.

The Jamaica Labour Party's (JLP) prospective candidate for the North West St Andrew by-election, Dr Nigel Clarke, is promising consultation with residents should he succeed in his bid to replace Derrick Smith as member of parliament on March 5.

Clarke, who was speaking on Sunday at a JLP Area Council One meeting, where he was formally announced as the party's pick for the seat, said that he was coming to the table with an open mind and an open heart.

"One of the things I plan to do as your member of parliament for St Andrew North West is help the communities here," the soon-to-be candidate told JLP supporters at the Pembroke Hall Community Centre on Sunday.

According to Clarke, who is now an ambassador at large in the Holness administration, he offered himself because he wanted to "fight the good fight".

He also mentioned that working together with Prime Minister Andrew Holness over the past decade has nudged him to dabble in the rough sport of politics.

Clarke told Labourites he was on a mission to advance the quality of life of the people of the area.