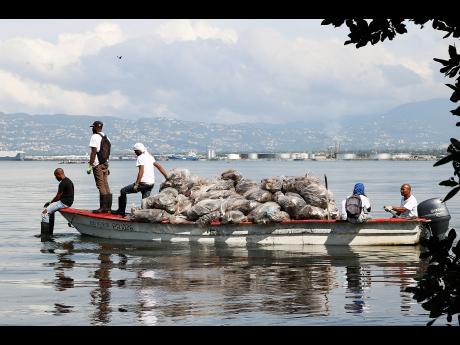 Christopher Serju
Their boat laden with another load of garbage collected from Refuge Cay, the crew prepares to head for the mainland. 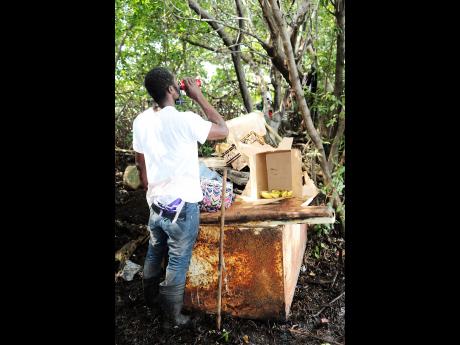 Christopher Serju
This discarded freezer, which found its way on to Refuge Cay, serves as makeshift table for the workers engaged in the massive clean-up effort before being shipped out. 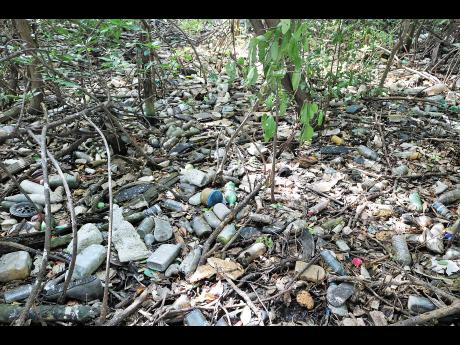 Christopher Serju
Plastic bottles strewn all over the land surface on Refuge Cay. 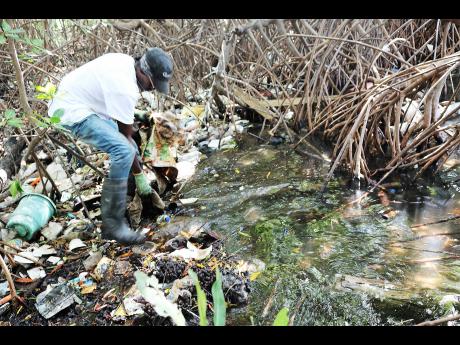 Christopher Serju
This worker struggles to pull a large piece of plastic from the wetland where it had been embedded for some time.
1
2
3
4

A mangrove island that sits about two kilometres off Port Royal is virtually dead - overwhelmed by tons of garbage, and marine biologists are warning that if it is allowed to die, it will take with it the livelihood of fishers, as well as the natural protection long provided for low-lying communities such as Port Royal, Portmore and Portland Cottage.

A rescue mission is currently on to save the cay, and, possibly, lives, removing 300 bags of garbage a day.

"The plastics will eventually kill that mangrove island. The forest will die," Mona Webber, professor of marine biology and director of the Centre for Marine Sciences at the University of the West Indies (UWI), Mona campus, declared during conversation with The Gleaner yesterday.

She was speaking about Refuge Cay, one of the few completely isolated mangrove islands in the Port Royal mangroves of Kingston Harbour, where the accumulation of garbage - primarily plastics - over the years now threatens the survival of the numerous species of resident and migrant (over wintering) birds, which roost and nest in the canopy of the mangrove trees.

"There is no plant cover in the middle of the cay as all mangrove trees have died and this is thought to be due to reduced water flow and lack of tidal flushing caused by the pile-up of garbage near the water's edge, especially on the north shore," Webber explained.

However, Kingston Freeport Terminal Limited (KFTL) has partnered with the UWI in a massive clean-up and rehabilitation of the cay.

The wetland also has the potential for ecotourism, with bird watchers being facilitated by mooring platforms and access around the cay, facilitated by fishers who would take tours to the area where persons can view a variety of birds, especially winter migrants.

To this end, KFTL has provided the UWI with funding to rehabilitate the forest on Refuge Cay and so save the island from eventual destruction.

The clean-up started on Monday, January 8 with 24 fishers, including three females and two fishers with canoes. It falls under the supervision of Paul Kisson, stationed at the Port Royal Marine Lab, and is managed by Webber and her team at the Centre for Marine Sciences.

They are battling huge mosquitoes and rats ... but the clean-up continues

Provided with cleaning tools and safety gear, the workers involved in the clean-up of Refuge Cay were battling mosquitoes and contending with rats three weeks into their task of removing of decades of primarily plastic waste from the edges of the cay.

"We've cleared about 300 bags of garbage off the cay daily, and we've covered about 270 metres so far. We've seen a lot of plastic bottles, and this is compounded by the plastic bags which are underneath and are wet. When I have a team that goes over the top, I have another team that follows that goes into the mud and gets out the bags, so it's been really hard. It's really difficult," Kisson told The Gleaner during a recent visit to the cay.

The clean-up of Refuge Cay is projected to last one year, with the rehabilitation of the coral expected to take five years, and all of this is being funded by Kingston Freeport Terminal Limited (KFTL), in keeping with its corporate social responsibility (CSR), Marketing and Communications Manager Trevesa DaSilva explained.

Since starting operations as concessionaire of the Port of Kingston in 2016, the company has engaged with the fisherfolk of the Kingston Harbour as part of its CSR, recognising that the impact of its operations (primarily dredging) cannot be divorced from the interest of other stakeholders.

"More specifically, KFTL invested human and financial resources with the fisherfolk through a series of community meetings, seminars, etc., where we shared concerns on the sustainability of the fisheries resources in the harbour for their future generations," DaSilva told The Gleaner.