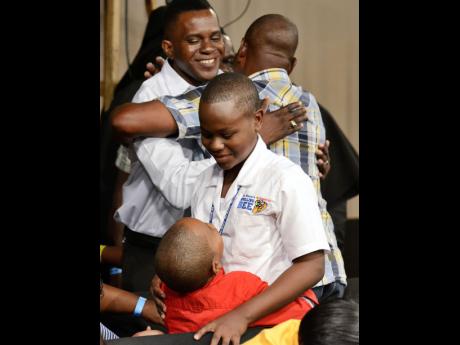 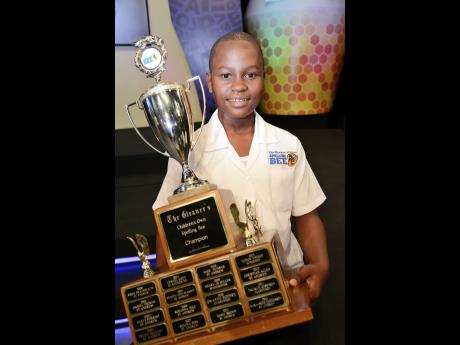 The rock solid confidence that Nathaniel Stone exhibited throughout yesterday's final of The Gleaner's Children's Own 2018 Spelling Bee Competition, was a sure indicator that the 11-year-old meant serious business. So it was no surprise when he walked away with the brightest of smiles which mimicked his shiny first place trophy.

As he competed against the likes of seasoned Spelling Bee competitor Assana Thompson of Ardenne High School, who placed third this year, the Glenmuir High School student stood his ground, delivering correct spellings for every word thrown at him.

He and second place winner Daniel Williams of Montego Bay High School, went right down to the wire, before Williams faced the possibility of being ejected for misspelling the word platitudinarian.

The ball was then in Stone's court, and he manoeuvred his way to the correct spelling of the word Orotund, following his coach's instruction during a break, to lure his competitor into the ocean, and if she could not swim, then he would have known by then, that he had the advantage.

The battle ensued inside the Television Jamaica Studios on Lyndhurst Road in St Andrew.

"I have mastered the art of keeping composed," the elated champion told The Gleaner.

"I believed, I had faith and I knew it was possible. I didn't rush the words; I maintained my composure, and kept prayerful during the rounds, so God allowed me to win. Each time I got a word correct, I said thank you Jesus. When I got a word that I didn't know, I just prayed, and God showed me the way. I kept the words simple and spelled what I knew would make sense. I put in the hard work, and so you just have to expect the unexpected. Again, thank God."

Even though grateful and happy, second place winner, Williams was not expecting such a high placement.

An emotional Assana Thompson on the other hand said it was a disappointing performance on her part, but she was still happy for Stone and Williams' placements.