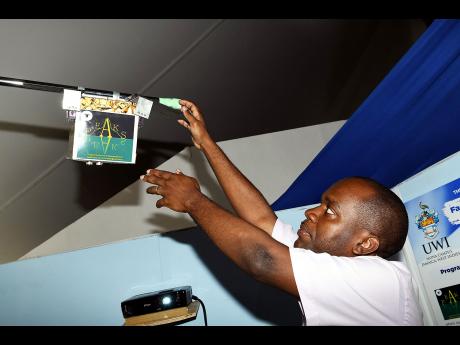 Norman Grindley
Dr Louis-Ray Harris, lecturer at the University of the West Indies (UWI) Department of Physics, explaining the function of the nanosatellite, yesterday, during the UWI Mona campus annual Research Day. 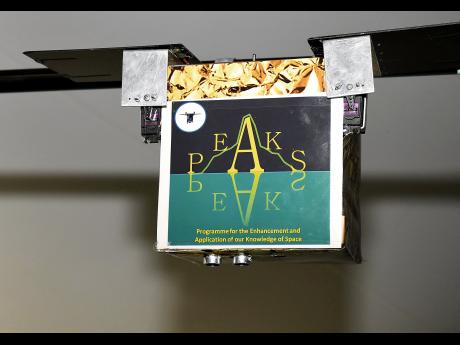 Norman Grindley
Nnanosatellite on display yesterday, at the the University of the West Indies, Mona campus annual Research Day. 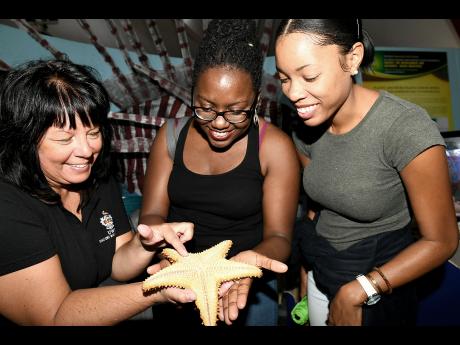 A satellite that will be able to send back weather maps and live updates of weather patterns of the Caribbean is being developed at the University of the West Indies for launch into space.

The Programme for the Enhancement and Application of our Knowledge of Space (PEAKS) is a nanosatellite that is being worked on with the hope of one day being launched into space, with wholly Caribbean technology at its core.

The satellite is the brainchild of University of the West Indies, Mona, lecturer Dr Louis-Ray Harris and his small team, comprising Jevaughn Dixon and Brandon Campbell. The trio hope to place a working satellite in outer space, given the right funding and partnerships.

The vision is massive and, if successful, will automatically place Jamaica among the several countries to have launched domestic satellites into orbit.

"It is the first in a series aimed at putting Caribbean technology into space and to generate interest in the application of science and technology," Harris told The Gleaner.

The term 'nanosatellite', or 'nanosat', is applied to an artificial satellite with a wet mass between 1kg and 10kg (2.2lb and 22lb). The precise scaled replica is being displayed for the first time at the UWI, Mona Research Day event, which ended yesterday.

PEAK is powered using both a solar as well as on-board batteries. Its solar panels can also be remotely controlled.

There is a wireless communication link with a remote server, which represents the earth-based mission control. It will be able to send two types of data autonomously from CUBESAT (cube satellite) to mission control, the interface of which is also now being designed.

"When launched, the satellite will be used as a tool to engage students for several programmes. It could be used to send back weather maps and live updates of weather patterns of the Caribbean, using its high-resolution cameras and other on-board instruments," Harris said.

He said that as a region with small island developing states, the Caribbean relies extensively on satellite services.

"We believe that the development of a regional space industry will benefit the region in many respects. In addition, such a thrust is expected to yield an increased interest in science by students at all levels, particularly in areas related to space and satellite technology," said University of the West Indies, Mona, lecturer Dr Louis-Ray Harris. He leads a team working on a satellite that they are hoping to launch into space.

He said that the actual transporting of the satellite will have to be sorted out in the future and that it will require partnerships and strong funding when the time is right.

Approximately 1,000 nanosatellites are said to have been launched since 2014. Harris is hoping to add Jamaica's first to the list in the coming years.