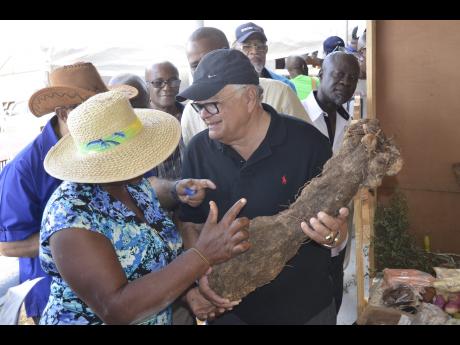 Minister of Industry, Commerce, Agriculture and Fisheries, Karl Samuda, holds a piece of yam grown in Trelawny as he interacts with a female farmer during his tour of the booths at the Hague Agricultural and Industrial Show in Trelawny on Wednesday.

The Ministry of Agriculture is to subsidise the cost of transporting sugar cane produced by the Trelawny Cane Farmers Association from that western parish to Worthy Park Sugar Estate in St Catherine, and the Appleton Sugar Estates, in St Elizabeth to the tune of $70 million.

The disclosure, which is like music to the ears of the cane farmers, was made by agriculture minister Karl Samuda, while addressing the 63rd annual Hague Agricultural Show in Trelawny on Wednesday.

"I could not come to Trelawny and not mention the situation at Long Pond. I went to the permanent secretary and requested the subsidy allocation, and I first asked for $50 million, but eventually, we settled on $70 million, which is the same as last year," said Samuda. "I could not stand by and allow the farmers to suffer. It is a matter of finding some form of employment for the residents in the area and for farmers to earn for their labour."

In a swift response to Samuda's announcement, Allan Rickards, the chairman of the All Island Cane Farmers' Association, said he was appreciative of the subsidy, albeit he would have preferred if the money was going to small cane farmers.

"There is no way that any Government is going to keep pumping money into these kinds of subsidies," said Rickards. "I would have loved for all of that money to be going to small farmers, but this money is for the transporting of the farmers' cane."

With regard to the strained relationship between the cane farmers and Everglade Farms, the operators of the Clarke's Town-based Long Pond Sugar Factory, Rickards intimated that the relationship is now irreparable.

"Long Pond is dead. The sooner we accept that, it would be better for the farmers. There is no way farmers are going to trust the investors in Long Pond who have treated them with contempt and disrespect," said Rickards. "A company, Farmers First Limited, has been formed, along with Packaging and Distributors, as minor shareholders, and that is the direction in which the farmers are now looking.

"It is our intention to use 30 to 35 tons of small farmers' cane to produce cane juice for the local and international markets. We is far down the road in getting started," continued Rickards. "The equipment are coming from India, and but for a few technicalities, some part of the equipment would have been on display at the Hague Show today. We will incubate at the Rural Agricultural Development Authority Incubator while establishing our plant."

"There will be no disconnect between the JAS and the Government," said Samuda. "There will be consultation with the JAS when the organisation is able to stand on its own and manage its valuable assets. Then a decision will be made."