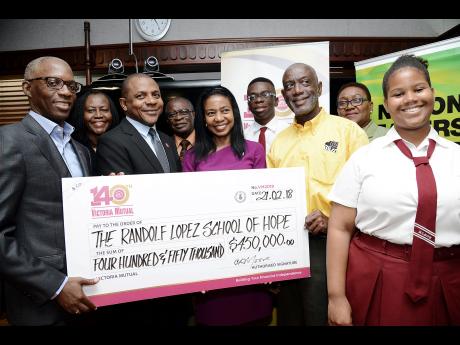 The National Leadership Prayer Breakfast Committee on Wednesday fulfilled its commitment to the Randolph Lopez School of Hope, handing over $450,000 to the institution that specialises in preparing mentally challenged individuals to function in a world they say is harsh to people with disabilities.

Sponsor of the prayer breakfast, the Victoria Mutual Building Society, hosted the handover ceremony at its St Andrew head offices, where principal of the institution, Sylveslina Reid, expressed gratitude for the money raised at the annual event held last month at The Jamaica Pegasus hotel.

However, Reid could not hold back from airing her disgust at the manner in which disabled persons are treated in Jamaica.

Making it clear that she was not upset with the Jamaica Urban Transit Company (JUTC), which provides a special service to the institution, Reid sought to outline a recent example of how misunderstood the disabled community was after one of her autistic students was thrown off a bus for acting up.

She also scoffed at the stabbing of a blind man recently by an egg vendor for accidentally overturning her eggs.

"There is a child at school who has autism, who doesn't travel independently, but was put off the bus by the driver because of acting up. I understand that the driver has a lot of lives in his hands, but at the same time, it could have been handled differently. Maybe he really was at his last end. What should happen is that the JUTC should provide a second person to assist with the children. It is very difficult for one person to drive the bus and to monitor the children, so I suppose that is what gave rise to that incident," said Reid.

"My take on that incident in Coronation Market is that we are a crass society. We have lost it, and when a society can't treat persons with disabilities with respect, I think we have lost it and are going nowhere."

Plans are afoot by Victoria Mutual to also dedicate a Labour Day project to the institution in May.

"We have leaking roofs, we need a sick bay, and that would help us greatly," Reid said. "Our students don't have a playing field. They play in one small area, and usually when the older boys kick football, they kick it on the other students, so meshing (fencing) that area would also help protect the students."