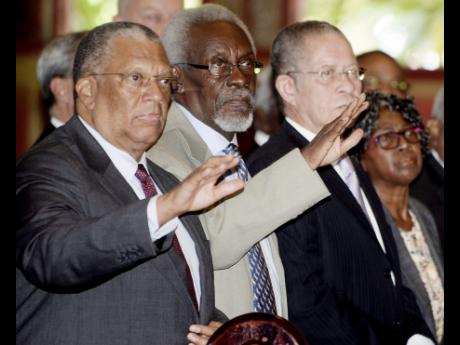 Businessman Michael Lee-Chin deemed it a privilege to have been friends with the late Noel Hylton for 16 years, with his only regret being that he had not known him longer.

That was the general sentiment among persons inside the Cathedral of the Most Holy Trinity in downtown Kingston as they paid their final respects to Hylton, who was described as a visionary, loyal and humble.

Among those who took time to celebrate Hylton’s life were former prime ministers Bruce Golding and P.J Patterson, Leader of the Opposition Dr Peter Phillips, among other parliamentarians, private-sector leaders and friends.

According to Lee-Chin, while Hylton was known as an incredible businessman, in addition to his many other accolades, he was drawn to the softer skills that his friend possessed.

“Noel has been a friend of mine for 16 years. He was always encouraging persons and trying to lift their spirits. He was very big on service to others and had deep loyalty to his family, friends and his beautiful soulmate ‘Pat’,” said Lee Chin.

In their tribute, daughters Natasha and Anika Hylton-Gooden shared some of the many pleasant moments they had with their father through the years.

“My dad nurtured my love for reading. Daddy and I would also travel a lot. I remember when I passed my Common Entrance and I got my school of choice, he took me to Europe. It was such a fun trip, but I grew up to realise that sightseeing wasn’t his thing, so that trip was a huge sacrifice on his part,” said Natasha.

Anika added: “Generosity, humility, loyalty and dedication were traits he embedded in us, especially dedication to family. Dad was truly my hero, role model and confidant. Thanks for being one of the best fathers in the whole world.”