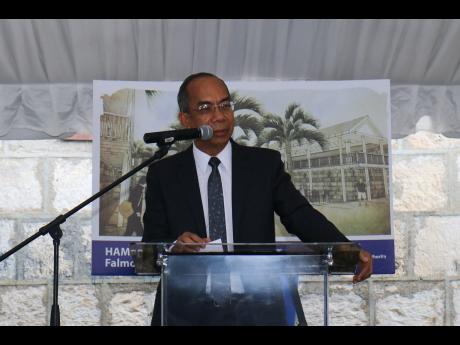 Minister without portfolio in the Ministry of Economic Growth and Job Creation, Dr Horace Chang, has rejected claims that locals are being left out of the developments taking place in the island's coastal towns.

Chang, who was addressing the Hampden Wharf Development groundbreaking ceremony in Falmouth, Trelawny, last Friday, said the warmth of the Jamaican people has long been one of the most attractive aspects of the tourism product and is being factored "in everything we do at all times".

He added: "It was important to this government, as we pursued the development of the historic town of Falmouth, to ensure that the people and township of Falmouth were included in this undertaking.

"The seamless interface that Hampden Wharf will provide between the port and the town of Falmouth was critical in our development plans for this town. Furthermore, the significant commercial real estate opportunities will help to bring more businesses and jobs to this town and create a truly interlocked community system that showcases authentic Jamaican hospitality."

According to Chang, the development of the Hampden Wharf is one of several being undertaken by the Ministry of Economic Growth and Job Creation.

He argued that the Port Authority of Jamaica (PAJ) must be congratulated for moving "this important development" to this point.

Several critics have long argued that locals are either being sidelined or have been deliberately left out of discussions and plans taking place in the island's resort towns.

They argue that a town like Falmouth where the Government is spending billions of dollars on infrastructural development is a classic example of where the people are being left out.

But Chang said nothing could be further from the truth. He said the Hampden Wharf development, which will cost an estimated US$5.7 million, is a clear indication of a major development that will be centred on local interest even though, like everything else, there are challenges.

He said the challenge is to robustly pursue sustainable economic development while preserving the avenues and environments for the local charm and warmth of the Jamaican people to remain in the reach of our visitors.

"We have seen demonstrated here, the kind of ingenuity and visionary design that will be required to engage the kind people of Falmouth and create a true port town," said Chang.

"Consequently, exhibited here is the attitude that will move Jamaica forward on its economic growth agenda.

"When we are able to combine social engagement with commercial development, we begin a cycle of continuous and sustainable economic engagement. I look forward to returning here in 2019 around this same time to witness the grand opening of the Hampden Wharf," added Chang.

In the meantime head of the PAJ, Professor Gordon Shirley, said the Hampden Wharf project represents one of many his agency has been undertaking in the town of Falmouth.

"We are doing a main market to replace the famed 'bend down market'," said Shirley.

"We are also doing an adoption of the Water Square area where we will also have some 12 pedicabs in operation," added Shirley.