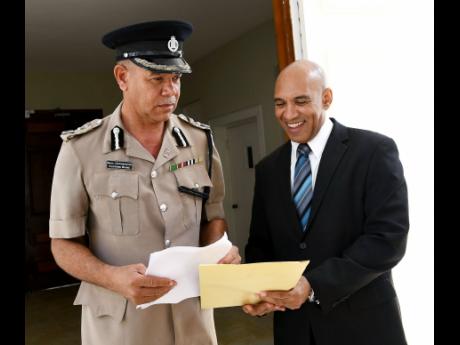 New police commissioner could look to the Jamaica Defence Force (JDF) to bolster his management team as he takes office.

There is growing speculation that former head of the JDF, Major General Antony Anderson, will look to his former colleagues for help when he takes over as commissioner of police today.

Among the first tasks that Anderson will have to tackle is filling two vacancies that exist at the top level of the Jamaica Constabulary Force (JCF).

The new commissioner, who takes office without the pomp associated with some installation ceremonies in the past, will have two clear vacancies in the deputy commissioner ranks that he will be able to make recommendations to fill.

Anderson will also have to decide on the role of the other deputy commissioners Clifford Blake, who is slated to return to his substantive post in charge of operations today, and Selvin Haye, who heads the crime and security portfolio.

Last week, sources close to the police force told The Gleaner that with Anderson being given a mandate to lead the reform of the JCF, it would come as no surprise if he was to seek to second persons from the JDF to help him in key roles.

Anderson has been tight-lipped about his plans since being selected by the Police Service Commission to lead the force, but with a reputation of performance to protect, it is expected that he will be allowed to put together the team that he wants.