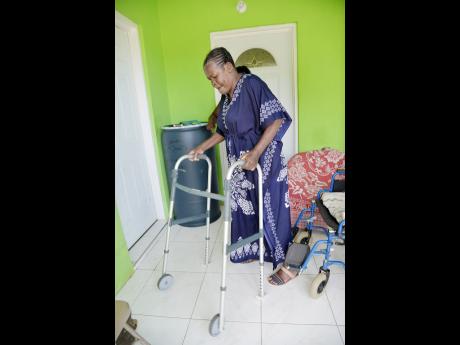 Ian Allen
Enid Smith from Fyffes Pen district in St Elizabeth was determined to walk again after a car accident almost a year ago left her crippled and broken. 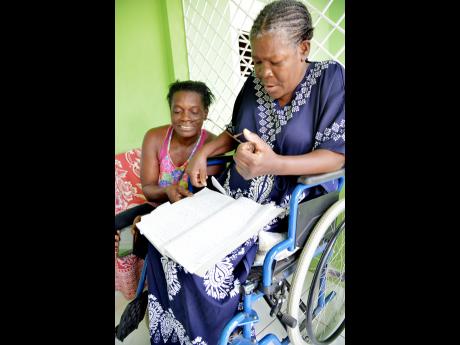 Ian Allen
Enid Smith (right) reads one of her poems to neighbour Ahara Dixon, who has been an angel to her. 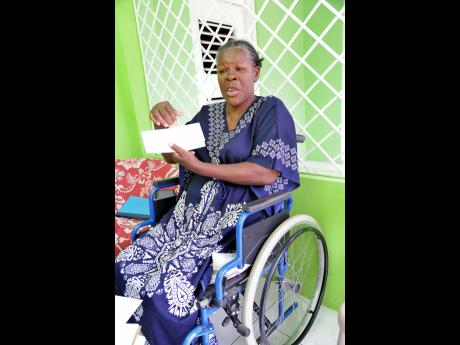 Ian Allen
Enid Smith shows a copy of the letter she wrote to the staff at Sir John Golding Rehabilitation Centre thanking them for helping her to recover from a major car accident.
1
2
3

A year ago, doctors told Enid Smith that she would never walk again, and that she would spend the rest of her life in a wheelchair, depending on others to take care of her.

Today, the woman of God stands laughing heartily at that diagnosis, and beams with gratitude at the mention of doctors and nurses at the Sir John Golding Rehabilitation Centre in St Andrew, who helped to change her fate.

Shortly after 10 a.m. on April 17, 2017, the 61-year-old woman of Fyffes Pen district in St Elizabeth was struck by a vehicle reportedly driven by a teenager who had taken his mother's car without permission.

The incident happened metres from her home and left Smith with a damaged spine, an ankle broken in three places, and handicapped in both her hands.

Months later, however, after several surgeries, and with excellent care and even stronger determination, Smith is now able to walk again, and wrote her first letter after the accident to thank the staff at the rehab centre.

"Believe me, the nurses that I met when I got there were so jovial. They were so nice. I consider them my long-lost family, who I never knew," said a smiling Smith on her veranda last Thursday, as she recalled the swell of pain and numbness she felt while sprawled on the ground after being hit.

NO USE OF HANDS

"When I went into the hospital I had absolutely no use of my hands. I couldn't do anything for myself. The physiotherapist didn't know where to start, but I was determined," she said, recalling how she had to relearn to feed herself, and the many times she fell back into the arms of staff at the rehabilitation centre as she taught herself to walk again.

"It was very difficult. All in my mind was that I was going to fall down. But because of the staff and the trust and belief that I have in God, I said that I came in on a stretcher and I want to walk out. I was very determined," she said, adding that she finished her rehabilitation before the time prescribed.

"When I was leaving the rehab I was able to feed myself, brush my teeth, bathe. Meeting those nurses and doctors who took care of me is like being reunited with my long-lost relatives. I say a big thank you to all of them."

Smith told The Sunday Gleaner that while her health has not been fully restored, she is now far more independent than after her surgeries.

MADE BREAKFAST FOR THE FIRST TIME

She made breakfast for herself for the first time last week.

"If you believe in God like I do, you will know there is nothing impossible for Him to do. Sometimes in life the Lord needs us to do some work, and in order to get prepared He has to strike us," she said, arguing that her story is a testament of God's will.

Unable to work, Smith is now supported by her children and her kind neighbour, Ahara Dixon, who spends many days ensuring that Smith is comfortable.

As for the teen driver, Smith said the case against him and his guardians is still before the court, but stated that she holds no resentment against the boy.

"He misjudged that morning, maybe he was frightened. But I don't put the blame on him; I blame the parents for how they dealt with it. But I leave everything in the mighty name of God," she said.