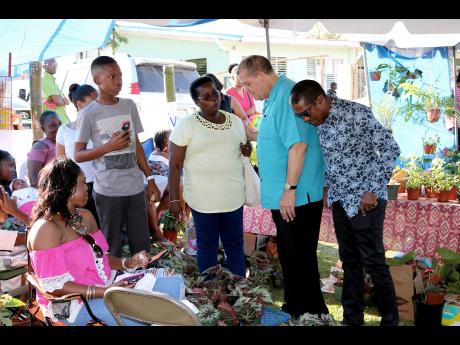 Audley Shaw, the newly appointed minister of industry, commerce, agriculture and fisheries, yesterday announced that Cabinet had dropped demands for $2 billion from dividend earned on Seprod shares owned by the Coconut Industry Board.

The decision represents a major shift in Government's policy. This comes after former Agriculture Minister Karl Samuda had demanded that the money be channelled into the Consolidated Fund to help drive agricultural development. The Coconut Industry Board has been resisting those efforts to wrest the money they have earmarked for a development plan.

However, yesterday Shaw made it clear that he was not going to stand in the way of progress during his keynote address at the annual St Mary Agri Expo at Grays Inn in Annotto Bay.

"As minister, my objective is not to try to take away the money and put it into the Government's revenue, because right now, the debate is about whose is it," argued Shaw. That must not be the debate. The real debates must be to take some of the money and help farmers get serious into coconut production all across the country, starting right here in St Mary. That must be the plan, not to take up some money to balance the Budget, while GraceKennedy have to go to Africa to get their coconut raw material because they cant get it in Jamaica," he added.