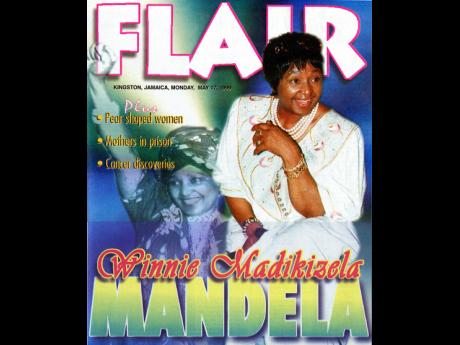 Reprinted from an interview published in Flair Magazine on May 17, 1999.

She is courageous, strong, beautiful, controversial and widely idolised by poor South Africans. Winnie Madikizela-Mandela has a strong support base in the African National Congress (ANC) and commands attention wherever she goes. During her visit to the island with the South African national football team last week, Flair met the ex-wife and former first lady of Nelson Mandela in an exclusive interview. Mrs Madikizela-Mandela is passionate and forthright when discussing past atrocities and as gentle as the wind when she talks about her children and grandchildren.

FLAIR: In his book 'Long Walk To Freedom', your ex-husband Nelson was watching as you packed him off for yet another journey, and he wrote, "She is as much like a soldier as a wife." What was it like for the young wife/mother in the dark years of the struggle? How did you cope, and how did you make the children understand?

WMM: I cannot pretend it wasn't extremely difficult, those were the most bitter years of our struggle. I was totally unprepared for the kind of life I found myself literally thrown into. We had not been prepared for the viciousness of the struggle. My children were very young at the time, and no mother would have been able to prepare her children for that kind of situation. It was tough to instill in them the difference between a criminal going to prison for murder and a political prisoner.

If you hadn't been to prison under the brutal apartheid system, you were branded a collaborator. We were all prisoners. The only difference was that the men were behind bars and women were in a bigger prison - South Africa was the bigger prison for every collaborator. We then had the problem of educating the children about family values. To break the law was an honourable thing to do.

FLAIR: What is it like for women in post-apartheid South Africa?

WMM: We are politically liberated, but women still have not attained full liberation. We are still battling with values that have been taken for granted in fully democratic countries. We are still fighting for gender issues [and] full representation in every sphere of society. Women are still less educated than men because in our culture, boys were sent to school and girls were relegated to kitchen jobs. We cannot compete in the labour market.

In the Soweto ghettos where I grew up, a mother had to work as a domestic servant, getting up at 3 a.m. to see that her white madam's child got breakfast and went to school while neglecting her own. In most cases, the father would be in prison; Influx Control Laws monitored the movement of blacks in their own motherland. Women have not yet achieved full independence.

FLAIR: Has the firebrand Winnie Mandela of the apartheid years softened in recent years?

WMM: No. I cannot pretend to be superficial or supernatural, the anger will never go. I am an ordinary being, the same blood courses through my veins, and if I had to take up the struggle again, I would do so without any problem. We were in the forefront of the struggle, and we haven't attained full liberation.

The tendency at home and in the international community is to think that it is the men who suffered, it isn't! You don't suffer by being behind bars; you have three meals provided by the government, no matter what grade the food is. It's the women who suffered, who had to find a piece of bread each day. Her children were motherless and fatherless, she had to send children to school and instill values that were non-existent in them. We had to tell our children to go to a Bantu school for inferior education. It left scars; we cannot pretend that we are messiahs. We are not bitter, but those scars will not simply vanish because there is a so-called truth and reconciliation committee; history still has to decide.

FLAIR: And speaking of history, how would you like to be remembered? Will history be kind to you?

WMM: Throughout the years of my struggle, the individual Winnie has never sought glory. I would like to be remembered as an ordinary freedom fighter who fought for the liberation of her people. And that fight has never stopped because the greatest revolution every freedom fighter is faced with today is the liberation of her people from poverty. That struggle seems not to have been worthwhile if our people are still poor.

FLAIR: There have been recent speculations in the air. What is your future role in South Africa? Do you have political ambitions?

WMM: I have no political ambitions. Without appearing to glorify myself in any way, if I had such ambitions, I don't think I would even be in parliament because I would have to be content with a ministry. That has never been my goal. I fought because I wanted to liberate my people and country from oppression. At no stage did the individual play any part in that. I have no such ambition.

FLAIR: You have been through hell and back, but you remain beautiful. You're in your 60s, yet there are no obvious signs of ageing, and your skin tone is excellent. Is there a beauty secret?

WMM: There's no beauty secret. I do not wear make-up. I've hardly had time to attach importance to what ordinary women in a liberated society would have thought of. We never had time for luxuries like cosmetics because there wasn't time to think of yourself as an individual or externally because the struggle came first. You cease to be a certain entity that must have a special appearance.

I have never had the opportunity to think of myself as me, only as part of the whole struggle. I never even had the opportunity to be mother to my own children. I was mother to all, my children are just part of the national oppression, and they never had the individual attention parents give. If I've attained anything, that alone beautifies me, not only internally, but externally. Having God as your guide - most politicians who attain power forget that they only reached there because God was on their side.

FLAIR: What has been the nature of your relationship with Nelson since the divorce? Is there any bitterness? Have you remained friends?

WMM: I never talk about Mandela. I have chosen not to do so. I was too hurt. I think my children had the worst of it. They waited 27 years to have a family, and everybody knows there would never have been a so-called divorce if we had not come from a brutal apartheid past.

That so-called divorce was the work of the enemy, and that one of us became weaker at a certain point and was overwhelmed by the tactics of the enemy is something that I leave for history to pass its verdict on what was or should have been. So there's no relationship for obvious reasons; the enemy would never want a situation where both powers remained together because it was important to them, and we have evidence in that regard.

With one weakened, we wouldn't present a formidable front. It was easier to manipulate one of us for their own good. It has left no bitterness. I'm one of the few fortunate women who married two husbands - the first was the ANC, and Mandela was the second, physical husband. My first husband will never let me down.

FLAIR: Is there someone special now? Will there be a third husband?

WMM: No, it is not possible to have a third. If we were totally liberated, but there's no time for that, yet!

FLAIR: But women do get lonely, and there are needs for companionship and love. Are you saying you're totally fulfilled?

WMM: Maybe one day, when we attain total liberation for our country, I would think differently, but for now, I am totally fulfilled by continuing my struggle. So much is left to be done.

FLAIR: What does Winnie do for fun and relaxation? Do you have time for hobbies?

WMM: There was no time to develop hobbies. The greater part of my struggle was devoted to the underground, and that was where I got my greatest satisfaction. I was able to participate physically and lead the underground, unleashing the same wrath that was unleashed on us. We covered much ground, but there's more to be done.

Most of the forces I led underground are today demoralised. Their children are all over, [and] the soldiers have been deprived of integration into the South African National Defence Force. It is my responsibility to see to it that they are integrated back into society. I have great plans for my country to continue that struggle. I will only rest the day my people have overcome poverty and the youth of the land are fully liberated and economically viable in their own country.