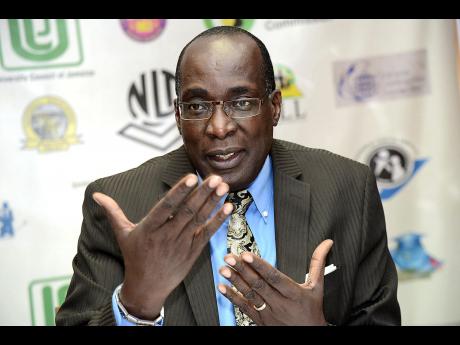 Several schools from across the Corporate Area have been dragged before the Sutton Street Tax Court in Kingston for non-payment of taxes, as Tax Administration Jamaica (TAJ) moves to collect millions owed to it by the institutions.

In confirming the legal action last week, Merris Haughton, chief corporate communications officer at TAJ, said more schools could be taken before the courts if they do not make arrangements to settle outstanding taxes.

"It is not like we are identifying and targeting schools, there are a number of other entities," said Haughton.

"The bulk of it (outstanding taxes) would be the principal sum, which would also have interest and penalties accrued because of the non-payment," added Haughton.

She told The Sunday Gleaner that TAJ is in talks with the administrators of the schools in respect of some elements of the outstanding amounts, but the outstanding principal would need to be paid.

According to Haughton, dragging persons or entities before the court for unpaid taxes is a last option for TAJ as matters can be made easier with dialogue.

"If they know that they are in that kind of position, what we have been encouraging them to do is to come in and explain. We have had such dialogue with other schools and then there is a stay of the court action," said Haughton, who refused to name the schools taken before the courts.

Two principals, who admitted that their schools were among those taken to court, told our news team that they were embarrassed by the legal action and blamed the Ministry of Education for the embarrassment.

"Years ago, teachers would go off on paid leave for months and we had to replace them. When we replaced them, the Government did not send any money to pay them, and so the schools had to be paying the teachers on leave and also those who we brought in," said one principal, who spoke with our news team on condition that the school should not be named.

"It was always a board decision and the ministry has always been informed," added the principal.

She said in some cases, the outstanding taxes date back as far as 2010, with some schools owing more than $60 million.

"We were sometimes paying about 10 to 12 teachers, and this was for years,' said another principal, who also spoke on condition that her school should not be named by The Sunday Gleaner.

"The understanding was that the Government would send back the money to the schools and the schools would pay it (taxes). That never happened," charged the principal.

According to the principal, they were made to feel like criminals as they sat on a bench at the tax court awaiting the names of their schools' names to be called.

"It was not a nice thing at all to sit down on the court bench and hear your name calling, because it was the principals who really felt the brunt of it.

"It was like every day for weeks, and remember, some of us weren't even principals at the schools at the time the tax was not paid.

"So the pressure that was on us to find all of our records and paperwork, and then to go sit down on the bench ... we got there at 9 a.m. and we were there until 4 o'clock in the evenings sometimes," said the principal.

In confirming the court action, the education ministry yesterday said it was aware of only four schools being taken to court and it is assisting through the process.

The ministry said that in cases where schools are served a summons they are expected to advise it, and steps are then taken in collaboration with TAJ to clear the taxes owed, which would have been before 2014.

According to the ministry, the outstanding principal has been paid for all the schools it is aware of except one, and it has applied to the finance ministry for a waiver of the penalties and interest.

Minister of Education Ruel Reid said the ministry had asked all schools that had outstanding taxes to submit requests for assistance to it before March of this year.

"Since 2016, the ministry has been providing substantial resources to schools to clear their long-standing tax issues," Reid told The Sunday Gleaner.

He urged schools to follow the correct protocols to have these matters addressed.

"Where they are having problems they should write to the ministry, as funds are available to address these problems. I am not aware that any recent request was not honoured," added Reid.

Statement from the Ministry of Education

As a matter of policy, since February 2014, taxes are paid at source by central ministry. Schools therefore no longer have to pay the taxes from the subvention they receive.

Prior to this, there may have been bursar-paid schools that had outstanding locum tenens claims. Locum tenens are temporary substitute staff.

The ministry has been paying off the outstanding locum tenens on a yearly basis based on submissions to the ministry. In cases where schools are served a summons, they are expected to advise the ministry and steps are then taken in collaboration with Tax Administration Jamaica to clear the taxes owed, which would have been before 2014.

This matter could also be that schools took on non-establishment staff without approval and hence find it difficult to pay, as no funds would have been sent from the ministry for them.

Please note that the ministry has adequate provision for payment for locum tenens as well as temporary teachers.

The ministry is aware of four schools in the court and is assisting through the process. The principal amounts for all schools have been paid up except for one, which is being processed for payment.

The ministry has applied for a waiver on the penalties and interest for all the schools, and is awaiting approval from the Ministry of Finance and Planning.

In the meantime, Minister of Education, Youth and Information, Senator Ruel Reid, said the ministry had asked all schools that had outstanding taxes to submit requests for assistance to the ministry before March of this year.

"Since 2016, the (ministry) has been providing substantial resources to schools to clear their long-standing tax issues," he explained.

Senator Reid also urged schools to follow the correct protocols to have these matters addressed.

"Where they are having problems they should write to the ministry as funds are available to address these problems. I am not aware that any recent request was not honoured," he said.