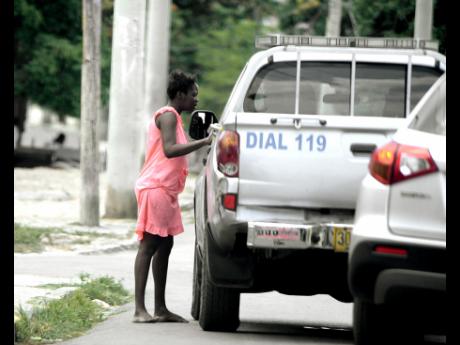 Lionel Rookwood
This resident of Denham Town seemed to be appealing to the police for help in the community yesterday. 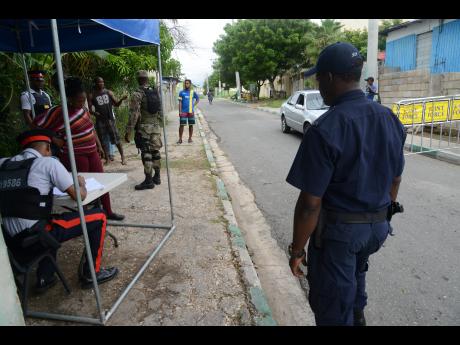 Rudolph Brown
The heavy security presence and the check points which were established when the ZOSO was first declared in Denham Town are no longer there, leaving the way clear for gunmen to strike and make their escape.
1
2

The announcement by Prime Minister Andrew Holness on October 17 last year that Denham Town had been declared the island's second zone of special operations (ZOSO) was welcomed by the residents, who dreamt of a peaceful future after months of bloodletting.

Six months later, that dream has become a horrible nightmare as a reduction of the number of police personnel and soldiers in the area has led to an upsurge in the violence, with the residents claiming that at least 20 persons have been shot in the west Kingston community, where heavily armed rival gangs are again running riot.

When our news team visited the community yesterday, only a handful of persons were seen on the streets, and they tended to stay near to the areas where the members of the security forces are still posted.

Hopelessness and despair were echoed by the few residents who were willing to speak inside the community, which is dotted with bullet-chipped buildings.

According to the residents, the criminals are again on the loose and no one is safe.

They pointed to the latest incident last Friday morning when gunmen pounced on a man identified as 'Reds' and peppered him with bullets as he reportedly helped a woman with her market bag near the intersection of Spanish Town Road and Pink Lane.

That murder followed those of a man and a woman and the shooting of at least five others in separate incidents last Wednesday. The police say that Taj Gordon, also called 'Fret Dem', and Jennifer Bruce, 58, were killed when gunmen travelling in a motor car opened fire at persons playing and watching football in the area of Denham Town known as Golden Heights at about 6:20 p.m.

Three other persons were shot and injured in that incident. In what is believed to have been retaliation, gunmen, later that evening, opened fire at a man and a woman on nearby Race Course Lane, hitting them.

Yesterday, the residents expressed fear that there would be more killings as the ZOSO continues in what the authorities describe as the "build phase", where there is a focus on social intervention and less focus on crime prevention.

"The people of Denham Town are crying out for help. The governor general, the prime minister, MP, we need them to come down to this constituency and help us. The people dem need some help," said one woman who asked not to be named.

She said that the killings were part of a gang feud involving men from Denham Town, neighbouring Tivoli Gardens, and factions from Golden Heights that have sided with the gangsters from Tivoli.

"I don't know what they are going to do to stop the killing around here. Trust me, the whole place tense," said another woman whose 21-year-old family member was shot in the incident on Wednesday.

"This is bigger than police and soldiers. They can't stop this. Only politicians can stop this because here is a garrison," said another woman who bemoaned the trauma that the shootings have had on her one-year-old daughter.

Some residents spent yesterday afternoon removing political graffiti from their buildings as a show of disappointment in the politics in a community that has traditionally supported the governing Jamaica Labour Party.

"You lucky if you see 100 people out here, and if the police never here, you wouldn't see anybody. Not even you would be standing out here talking now. Everybody would be behind corners," said one man as a mother shouted at her young son in the background to get inside the yard.

The fearful residents almost uniformly had buttons with the images of someone who had been killed in the community in recent weeks as they prepared to bury another of their own today.

They identified the person to be buried as Patrick Davis, who they alleged was abducted and later found dead in Tivoli Gardens.

Davis, like Owen Powell, a construction worker who was killed on Princess Street, just outside the borders of the Denham Town ZOSO in March, was allegedly part of last April's gun attack on Leighton 'Livity' Coke, brother of convicted drug lord Christopher 'Dudus' Coke.