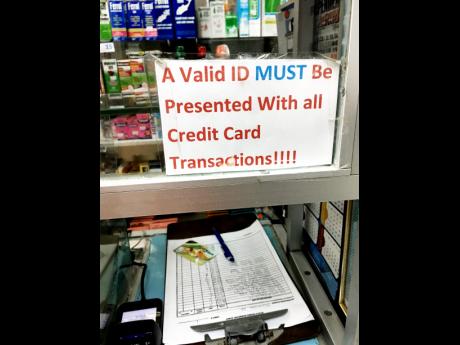 Struggling to deal with the incidents of debit and credit card fraud, locally, businesses are introducing several measures to confirm the identity of the persons presenting the cards.

In addition to the long-established practice of requesting valid picture identifications before accepting credit cards, some merchants are now asking for taxpayer registration numbers (TRN) while others are taking

At a business in New Kingston, our news team was told that the cashiers must take a picture of a valid identification before accepting a credit card or debit card.

In Portmore, St Catherine, operators of two supermarkets said that if the purchase was above $40,000 the supervisor had to record the customers' TRN.

But principal director of investigations at the Financial Investigations Division, Albert Stephens, told The Sunday Gleaner that this method of verification was unusual, and under the Cyber Crimes Act, the salesperson could be liable if the information from the identification card was shared and used to defraud the customer.

"What the stores are doing is foolishness, and what they are doing is only opening up the gate for more fraud because, what are you doing with all that information on your phone? And I can bet it's the person's personal phone," said Stephens.

"For Visa and MasterCard, they have mechanisms in place to pick up on unusual patterns of transactions, so they can lock down the card from there and trigger an alert to the cardholder to ask, was it you who actually made this purchase? So they don't need store owners to be doing all of that," added Stephens.

According to Stephens: "Some persons are doing this out of an abundance of caution, and you can see with them why they are very cautious because credit card and debit card fraud is on the rise, however, some of them are crossing the line as to the consumer's rights.

Hope McMillan-Canaan, marketing, public and corporate affairs manager for one of the island's largest commercial banks, Scotiabank, says that they have been getting a few complaints from customers about merchants not accepting credit cards and, or, some merchants asking for an ID with the use of a credit card.

ID not a requirement

"The Merchant Agreement that exists for all banks states that all cards must be accepted, and also, a sale should not be refused because of lack of an ID. Merchants are trained in prescribed payment card industry best practices for card acceptance and fraud prevention and should be able to accept a sale based on the card security features.

"We ask customers faced with this issue to report the companies as this action goes against the agreement signed with the merchant. Customers are also reminded to ensure that they protect their cards," said McMillan-Canaan.

She added that to further enhance customer security, Scotiabank had been rolling out its EMV chip cards, which provides an additional layer of authentication and includes the uses of a PIN.

Similarly, Group Marketing and Communications Manager of National Commercial Bank Nichole Brackett Walters says that her bank has also received complaints from customers as it relates to using an ID and the recording of TRN numbers.

"Customers are responsible for protecting their confidential information. We strongly discourage cardholders from sharing or allowing anyone to document details of their personal identification, debit or credit card," said Brackett Walters.

The legal unit at the Consumer Affairs Commission (CAC) has also charged that the merchants are going too far.

According to the CAC, merchants may be committing a breach of the Charter of Fundamental Rights and Freedoms (Constitutional Amendment) Act, 2011, and consumers should exercise their right to choose and not conduct business with entities that engage in these practices.