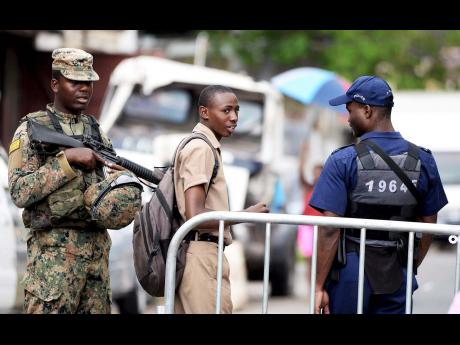 Lionel Rookwood
A student asking members of the security forces for directions at a checkpoint on Regent Street during the return of heightended security presence during the ZOSO in Denham Town, west Kingston, yesterday.

Residents of Denham Town in west Kingston yesterday welcomed an increase in the presence of the security forces in their community after several persons were reported to have been shot in the zone of special operations (ZOSO) in recent weeks.

The presence of the security forces had been scaled down recently as the ZOSO entered its build phase, where the emphasis has been placed on social-intervention activities and less on the search for illegal weapons and wanted men.

But with more than 20 persons reportedly shot in recent weeks, five of whom were attacked on a football field last Wednesday, the authorities yesterday said they had no choice but to once again increase the number of boots on the ground during the weekend.

"We have increased the number of police in the space because we realise that criminal elements are seeking to exploit the gains that have been made. We can observe that with the most recent of occurrences on Wednesday. So against that background, the fear among the residents has caused us to restrategise," said Bartley.

Yesterday, an increased number of police and soldiers were observed on most street corners in the community, and workmen were seen replacing several portable toilets to be used by the security forces.

Some streets that were recently freed from security checkpoints have again been cordoned and persons again required to declare their identities and purpose before crossing.

Most residents yesterday said that they were glad for the increased police presence, as they felt it was the only way the shootings would subside.

"I'm glad to have them back, trust me. If it is up to me alone, they would live down here every day because it is dread. I don't know what happen to them little boys here," said one street vendor, not far from a reinstated security checkpoint.

"It looks like if we don't have police and soldier down here, it can't be better. All the police and soldiers tired of them now. Them (gunmen) grieve me, trust me. As six o'clock come, we have to be locking up," another female vendor complained.