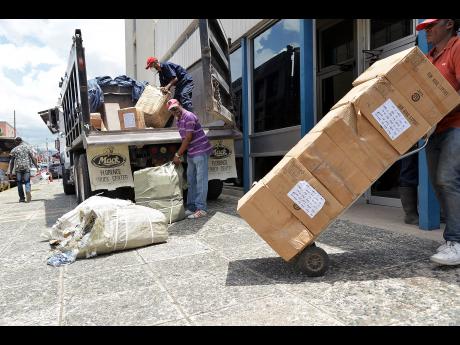 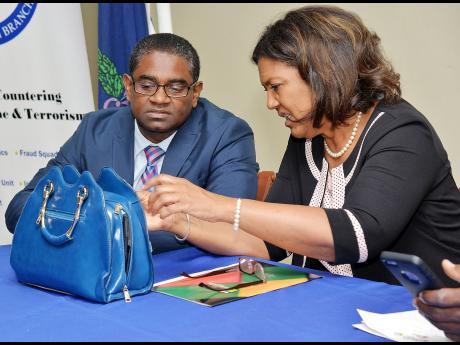 Ian Allen
Lilyclaire Bellamy (right), executive director, Jamaica Intellectual Property Office, and Victor Barrett (left), assistant superintendent of police, C-TOC branch, examine a bag that was among thousands of fake goods seized, and which was on display at its Kingston Mall office yesterday. This was during the Intellectual Property Week 2018 public 'Destruction Day' Press Conference on Wednesday.
1
2

Counterfeit goods valuing $1.2 billion were destroyed by the Counter-Terrorism and Organised Crime (C-TOC) Branch at its yearly 'Destruction Day' in Kingston yesterday.

Executive Director of the Jamaica Intellectual and Property Office (JIPO) Lilyclaire Bellamy disclosed at a press conference on Wednesday that the items had to be destroyed simply because they were not legitimate goods.

"They don't satisfy the standards, so they cannot be released to the public ... . The Government would be making available to the public goods and products that could have a debilitating effect on the health of the consumer. So it's not that we can sell them - they will not be sold. They have to be destroyed," said Bellamy.

Assistant Superintendent of Police for the Intellectual Property Unit at C-TOC Victor Barrett added that when the rights holders complain to them, they take the items off the streets and are bound by principle to destroy them.

In his remarks at the press conference, Assistant Commissioner of Police and head of C-TOC Fitz Bailey disclosed that there had been massive diversification in the types of counterfeit products on the streets of Jamaica.

"They come from all sectors, where there is potential profit. Those who carry out the act of counterfeiting and piracy are doing so on an industrial scale and acting like professionals," stated Bailey. "This, ladies and gentlemen, is a worrying development that requires an immediate concerted, comprehensive joint response from stakeholders and authorities at the national and international level." He added that toothpaste, baby formula, and Viagra tablets were part of the diversification.

Barrett says that C-TOC will shortly be embarking on a public education campaign: "We continue to police the industry. We will embark on capacity building for our staff and public education for our citizens. We are going into the schools, the churches, and the communities to educate our citizens about the ills and the dangers of counterfeit goods."

- More than five persons were arrested and charged for the items

- More than $1.9 billion worth of counterfeit goods were destroyed in 2016