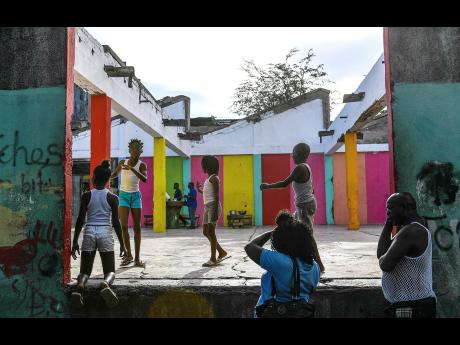 Gladstone Taylor
Some of the promising children of Rum Lane in Tel Aviv displaying their dancing skills last Wednesday. 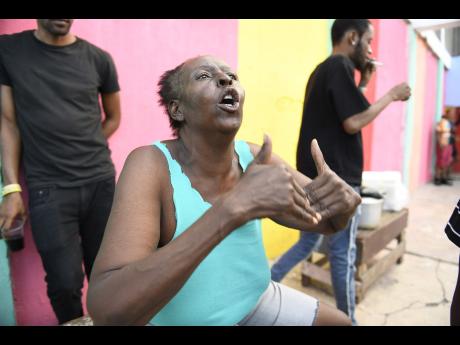 Gladstone Taylor
An expressive Florence speaking about the parenting problems in Tel Aviv.

Unprepared for the task of raising a child, with little or no family support, parents in the central Kingston community known as 'Tel Aviv' have been blamed for much of the woes facing them.

Participants at a Gleaner-RISE Life Management On the Corner with Unattached Youths forum in Rum Lane, Tel Aviv, last Tuesday, were almost uniform as they declared that the failure of mothers and fathers was creating little monsters with no values.

"The biggest problem we have in the ghetto is not because we don't have money or drive a nice car; it is the woeful lack of decent parenting. Parents who are willing to teach the children how to be good people," said Omi, a resident of Rum Lane.

According to Omi, growing up in one of Kingston's tough inner-city communities has given him insight into the causes of the state of these areas, and he pins the blame squarely on adults, who have created a "perilous state which children have come to accept".

He added: "It is the parents and the adults who I have to blame for all of this. I see in this community mothers who go to dance with their daughters and di man dem do anything in front of the children. So how dem expect the youths to behave any different?"

Twenty-one-year-old Britney Williams agreed with her neighbour, as she added that change will never come to their community until the illegal guns are silenced.

"Is 21 years I live here and it is all about who killing who and it's all because of improper parenting, because outa that come the gunman dem," said Williams.

Another resident, Florence, was quick to agree.

"All when it (parenting class) come, the parents dem nah go. Them worthless and careless like what. Everybody deh a dance a fling shoulder - daughter, mother, and granny. Little boy wa don't even know fi pee-pee straight a dagger big girl," said Florence.

While sharing the concerns about parenting, Diana Patrick, who has two sons of her own, said that the unfortunate state of affairs inside Rum Lane has been made worse because little formal structure exists to account for the people in trouble.

"These are youths with some skills, they are barbers and masons and some of them really would like to better their education to leave, but the influence around them is no good. They grow up seeing the adults behaving a way, and they adopt it. Children live what they learn," said Patrick.

"Some of dem just need a little push, otherwise they turn parasite on good people and start killing off dem one another, mostly because dem really frustrated. I think that most of dem feel trapped," added Patrick.

No age limit on education – 43-year-old mother of four heading back to school
Save the youths with music! - Southside wants a recording studio to occupy the minds of unattached youngsters
Motherless, jobless but not hopeless - Kimani searching for an opportunity
Cruel & clueless - 'Tel Aviv' held hostage by young gangsters who don't know what they are fighting for
Crime college 'Tel Aviv' - After 20 arrests David now determined to shape a different destiny