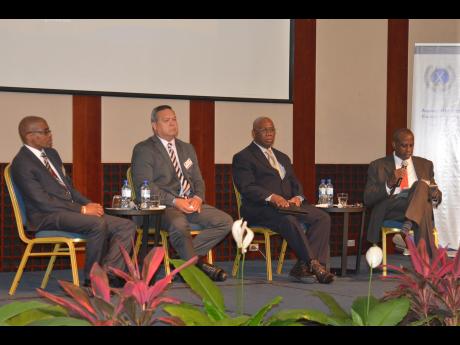 Participants in a panel discussion on the second day of the Association of Caribbean Commissioners of Police’s 33rd annual conference in Montego Bay. From left: Selvin Hay, deputy commissioner of police in charge of the Jamaica Constabulary Force’s crime and security portfolio; Christopher Maston, port director at the Miami International Airport, US Customs and Border Protection; Jacob McDonald, assistant commissioner of police in the Trinidad and Tobago Police Service; and Captain Errington Shurland, executive director of the Regional Security System.

Selvin Hay, who serves as a deputy commissioner of police (DCP) in charge of the Jamaica Constabulary Force's (JCF) crime and security portfolio, has said that based on factors such as geographical location and the presence of 145 unmanned ports across the island, Jamaica is a prime location for firearm trafficking.

"By sheer geography, Jamaica is placed in the midst of a trafficking route right across South America, North America and Europe. So while it (Jamaica) is ideally placed for a tourism paradigm, it is, unfortunately, also the ideal place for trafficking of various contraband, and among the contraband are firearms," said Hay.

He was participating in a panel discussion on yesterday's second day of the Association of Caribbean Commissioners of Police's (ACCP) 33rd annual conference at the Montego Bay Convention Centre in St James.

"This huge island of ours has over 145 unmanned ports, so now you tell me, how easy is that to police?" asked Hay.

"We have looked at various solutions to that problem, and we are embarking on electronic surveillance and the use of marine assets to help us in that regard. Plus, we are looking at tightening our border patrols," he told the gathering.

Hay further noted that partnerships with several regional agencies have reaped good results in curbing the importation of illicit firearms into Jamaica.

Continued Hay: "We are at the threshold of looking at various strategies to stem some amount of the problems we are facing. We are seeing the fruits of collaboration [with other agencies] in recent seizures at the ports and other operational successes where we have managed to take several firearms off the streets."

The four-day conference is being attended by representatives from some 25 member states. Their mandate is to discuss regional collaboration in the development of policing strategies, identification of proactive crime-prevention measures, and improvement of police-community relations.

Chang made the statement while addressing the opening ceremony of the 33rd annual general conference of the Association of Caribbean Commissioners of Police (ACCP) at the Montego Bay Convention Centre in St James on Monday.

"In order to address the complexity of organised crime, the modern force is led by police commissioners that are holders of multiple intelligences, [they are] essentially modern corporate leaders with all the requisite skill sets required for such individuals in today's world," he added.

"What this business-sensitive approach will create is a cordial, sociable peace-keeping officer, who also has the skill and professional awareness to intercept and counter organised criminal syndicates, which themselves have started to operate as complex corporate organisations, using every modern technology," Chang said.

"It is instructive that, as Caribbean leaders in the field of security, you have chosen Montego Bay to host this important conference today," noted the national security minister. "It is not lost on us, the citizens of Montego Bay, that what will impact the issue of crime in this city is strong, decisive leadership, as we rise to meet the demands of a rapidly changing world where we acknowledge the need for transformational leaders in the police force," he said.