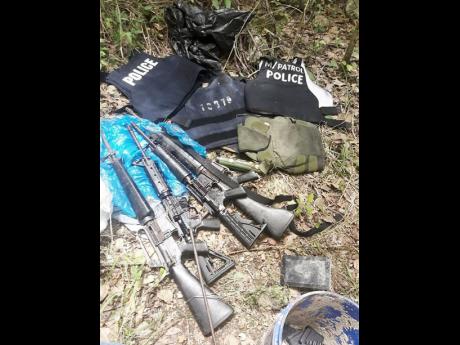 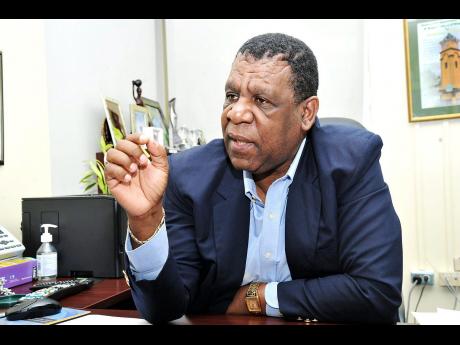 The security forces yesterday had arguably their best day since the state of public emergency (SOE) was imposed in St. James earlier this year when they seized four M16 assault rifles, four ballistic vests, four magazines and more than 100 rounds of ammunition in Ramble Hill, on the outskirts of Montego Bay.

Four M16 assault rifles and the vests - three marked 'police' and the other appearing to be a military issued vest - all appeared to be in pristine conditions. They were found alongside 156 rounds of ammunition and the four magazines for M16 rifles where located in rugged terrain in a section of Ramble Hill called Rocky Hill.

Late yesterday, the police seized one Mack submachine gun, two Glocks, and a .38 handgun in another section of Ramble.

"This is a tremendous find [and]a major dent in the armoury of the gang that owned these weapons,” said Assistant Commissioner of Police Ealan Powell, who heads the Jamaica Constabulary Force (JCF)-side of the SOE. “Taking four M16s and 156 rounds of ammunition off the streets is tremendous. I believe we have saved many lives,” he told The Gleaner in response to the cache of weapons found.

“I want to congratulate the team that carried out this operation. it took hard work and diligence to get to where these weapons were found,” added Powell.

This major gun find follows comments by Montego Bay’s mayor, Councillor Homer Davis and newly elected president of the Montego Bay Chamber of Commerce, Winston Lawson in support of retaining the SOE, amid calls for its dismantling by other stakeholders, who claimed it was having a devastating effect on the city's economic life.

Yesterday’s success by the security forces was not limited to St. James. In an operation in response to Tuesday’s murder of seven persons in Grange Hill, Westmoreland, a major operation was carried out in the parish. According to a senior police source, it too was a tremendous success as more than 100 persons, inclusive of known gangsters, were taken into custody.