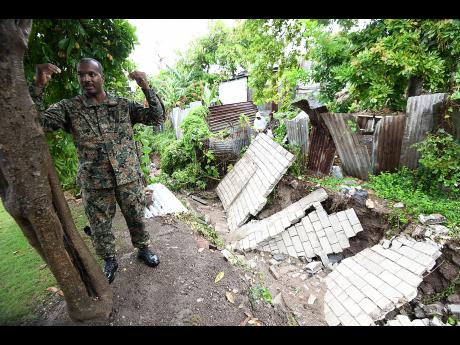 Ricardo Makyn
Orion Archat, president of the Harbour View Citizens’ Association, stands next to the area where a wall collapsed at 19 Harbour Drive because of heavy rains yesterday.

The fear was evident in the faces of several residents on Harbour Drive in Harbour View, St Andrew, yesterday, as they prayed for an ease in the rain that lashed the community Sunday evening into Monday morning.

More rain over the next 24 hours could cause almost 30 families to lose their houses after floodwaters destroyed the perimeter walls at the back of their properties early yesterday morning. The fearful residents are blaming the authorities for the threat that they now face.

"In 2015, they started a World Bank-funded project to take the water from the hills above Harbour View. We saw the drawings and the scope of work and we told them it could not work.

"We told them about the effect that it would have and the erosion that would result. They said we were not engineers, but we have had six feet of erosion since 2015," recounted Orion Archat, president of the Harbour View Citizens' Association.

According to Archat, the citizens' association has taken its concerns to all the state agencies that it believed could help, but nothing has been done to date.

"We have been lobbying the Government and we have told them to fix the issue. We have also given them solutions - one being to build six-foot retaining walls and put removable slabs so that the water will not erode the area ... but they said we were not engineers," added Archat.

Oliver Clue, councillor for the Harbour View division in the Kingston and St Andrew Municipal Corporation, who turned out to offer support to the residents yesterday, also chided the Government for not fixing the problem before the residents lost their walls.

"I am very hurt and upset about it, and it is not for a lack of representation. I have been in meetings with the minister of local government, the National Works Agency, and others. We have been crying for help and, now, this is what has happened," said Clue, whose division borders Harbour Drive.

"I fear that it is going to be worse going into the hurricane season," warned Clue.