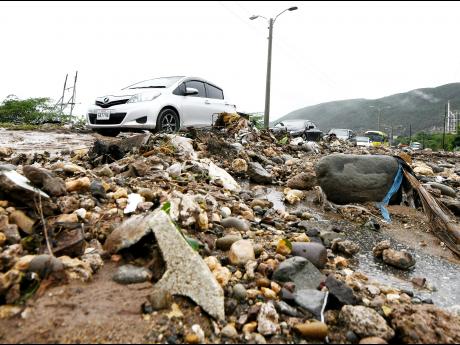 Ricardo Makyn
Motorists make their way slowlly in the east-bound lane along Sir Florizel Glasspole Boulevard and the intersection of Harbour Drive in Harbour View, St Andrew, due to silt and sand along the roadway yesterday in the aftermath of flood rains on Sunday night.

Ethel Pete-Smith was in bed with the pitter-patter of the rain on her roof lolling her to sleep when she heard a loud rumbling, then a crash, as the wall to rear of her house at 19 Harbour Drive in Harbour View, St Andrew, collapsed.

The floodwaters behind her premises had eaten away the earth beneath the wall causing it to give way.

"I was in my bed when I heard the impact, then my neighbour called me. From I heard her call me, I realised it must be something why she would call me at that hour of the morning (1 a.m.). Then she said that the wall had fallen down.

"But we have been observing this threat for some time and we knew that it was not a good idea [for Government] to build that drain behind our house," said Pete-Smith.

"Now we are in grave danger, my neighbours, my family and I. We have nowhere to go and we can't just pack up and leave our investment like this," added Pete-Smith, who has been living in the house on Harbour Drive for the past 14 years.

It was a similar story for Fabian McLaren, who heard the shouts of his neighbour shortly after 1 a.m.

"I pulled the back door and when I looked out, I saw nothing. The wall was painted white, so when I looked out into the darkness, I knew that it had gone down," related McLaren, as he echoed the fears of Orion Archat, president of the Harbour View Citizens' Association.

"We have senior citizens who are about to be displaced. This is catastrophic. If you look up there, [you will see that] the earth is caving in towards the back porch. Right here, it is the same thing. The earth is saturated," said Archat as he stood at premises of 19 Harbour Drive and pointed to a property two doors away.

Archat said that the citizens' association has long pointed to the possibility of this problem occurring, but its plea for the matter to be addressed has fallen on deaf ears.