Police not making full use of body cameras -Commissioner 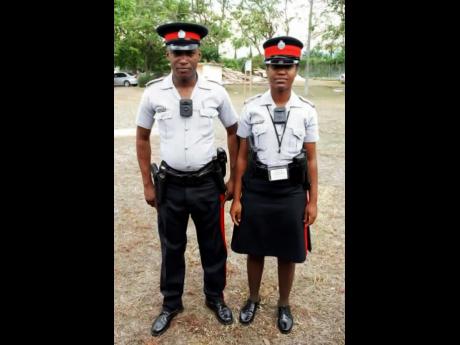 Two members of the JCF outfitted with body cameras

Acknowledging that the police force has not been making full use of the body cameras introduced two years ago, Police Commissioner Major General Antony Anderson suggested yesterday that the project was not implemented properly.

“The whole implementation of body cams in the police force is something that hadn’t been done in the way that I would normally implement something,” he said.

“That’s a natural part of modern policing. So, we have body cams, you have car cams, and you actually have cameras around. So [with] a little bit of patience, let us implement things properly to give us our effects,” said Anderson.

The commissioner added that while some of the cameras were being used, they were limited in number and there had been some challenges with implementing it across the force.
“One, you don’t have enough, and, two, our uniforms don’t have the technology to actually properly wear them. We are looking at some other models that we have seen recently. We have met some representatives up to last week that, perhaps, will suit what we do better,” said Anderson.

Questions were raised recently from different sectors of the society asking for an update on the cameras and why there was no footage from any operations that featured body cameras .

“There have been recordings and some have been down-loaded; we are just working through that and many other things at the moment,” he told The Gleaner.

“When you introduce new things and new capabilities, it’s a process. You don’t just buy something to stick them on. There’s a training component, there’s an equipment back-up component, a logistics component, a command and control component to it. There’s a whole thing that you used to deliver capabilities, but we haven’t been that good at it,“ said Anderson.

The pilot project was started in 2016 when 120 body cameras were handed over to the Jamaica Constabulary Force by the United States Embassy.