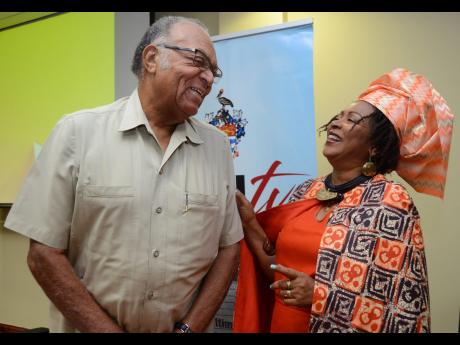 The recently publicised discriminatory immigration measures by the British government against hundreds of Jamaicans and other Caribbean peoples of the Windrush Generation have energised the reparation movement, says Professor Verene Shepherd, director of the Centre for Reparation Research at the University of the West Indies (UWI).

Calling for more than an apology, Shepherd has advocated that Britain should be held responsible for the plight of the Caribbean migrant who settled there to earn a honest living, but were denied their rights as British citizens.

“The people who are offended by the Windrush atrocity are united and want to see the United Kingdom restore their citizenship rights, apologise and pay compensation,” Shepherd stated yesterday, while addressing a Vice-Chancellor Forum at the UWI, Mona, under the theme ‘Empire Windrush ­ Migration, Exclusion and Compensation’.

She said that there was an intersection between the call for redress for these black people and the reparation movement, and was calling for “repair, apology and compensation”.
Shepherd reasoned that the Windrush atrocity was about “historic wrongs” against people who are alive today.

“This allows people to see the atrocity as another crime against humanity that reparation is fighting for. It is one more part of the reparation cause and people are connecting the dots,” she said.

“We need to face the fact that British society demonstrates anti-black racism and that we are living in a neo-colonial space. We are living with former colonisers who are reluctant to face up to their wrongs and who still maintain a view that black people are dispensable; that they can benefit from the fruits of their labour and discard them,” Shepherd noted.

She suggested that a united approach to the historical injustices perpetrated by the British regime was needed to get them to negotiate terms of reparation.

“We must stop playing around. We understand that governments negotiate. But, with the Windrush atrocity, we have to learn that, unless we have a united opposition to injustice and don’t treat these as nine-day wonders of outrage and move on to the next thing, we will not get what we want,” said Shepherd.

“What we saw with Windrush is the benefit of collective, united, sustained, diverse voices calling for an injustice to be remedied, because we now have world attention on this issue. Some of those voices before this would never even say ‘reparation’ for historic wrongs. It is time to confront Britain,” the professor declared.

The Windrush Generation refers to migrants arriving in the UK between 1948 and 1971 from Caribbean countries in response to post-war labour shortages in the UK.

The MV Empire Windrush initially carried 492 passengers in 1948 ­ many of them children ­ and despite entering with UK passports, hundreds have not been given citizenship status.