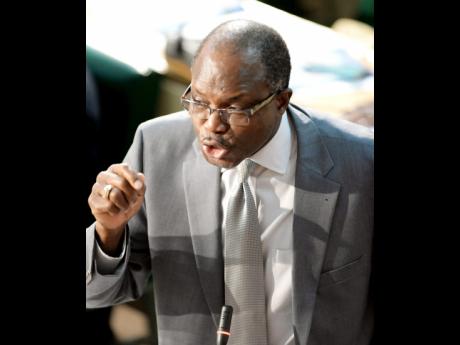 Everald Warmington, the state minister with responsibility for works in the Office of the Prime Minister (OPM) and who chairs the Constituency Development Fund (CDF) Committee of Parliament, yesterday unleashed a tirade against the RJRGLEANER Communications Group, accusing the media entity of wanting to topple Prime Minister Andrew Holness and bring down the Government that he leads.

Warmington also questioned the mental health of some of the persons writing for The Gleaner during yesterday's sitting of the CDF, apparently in response to a Sunday Gleaner article about the new head of the CDF management unit, Kedesha Campbell.

"It's the prerogative of the prime minister to appoint who he wants to appoint. He does not need to hear from the Opposition nor the news media. He was elected to govern, and that we must respect at all times," Warmington said. "And I say repeatedly that the agenda at The Gleaner is to bring down Andrew Holness, and they are not going to succeed ... ."

He added: "... I do hope that the press would be a little more kind on the new director. And when you have gutter journalism, it keeps on just popping up, you know. And her qualification was questioned. And then you have a release from the PNP (People's National Party) talking about that she was special assistant to the prime minister, and, therefore political, what have you ... ," Warmington said, following comments from committee member Floyd Green welcoming Campbell.

"We need to lift ourselves above the gutter ... and the gutter journalism ... . We don't attack everybody's credibility or qualification because we have a different political view," Warmington said.

On Monday, the Opposition People's National Party, in a news release, expressed concerns about Campbell's appointment, questioning whether it was properly advertised as well as her qualification and experience for the job.

Campbell's qualifications were outlined in the Sunday Gleaner article and she was presented as a project management specialist with more than 10 years' experience in the public sector.

She was said to hold a Bachelor of Arts degree from the University of the West Indies, a postgraduate diploma, and was finalising her master's degree. She served as the personal assistant to the prime minister prior to her appointment.

Prior to the end of the CDF meeting, Warmington said that he wanted to add RJR to his claim of The Gleaner having an agenda.

HEAR WHAT WARMINGTON HAD TO SAY