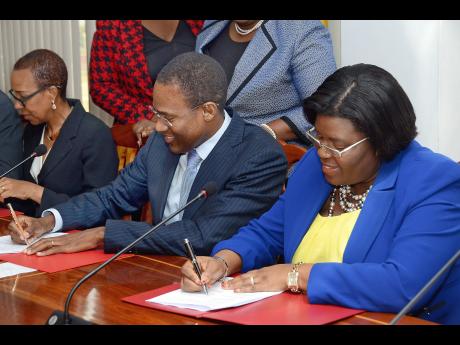 The island's public school teachers should see a five per cent increase in their basic salaries come payday next month.

The teachers will also see increases in several allowances, plus any top-up that they may be due on the five per cent retroactive payment that they received in March. This forms part of a new four-year wage agreement signed by the Jamaica Teachers' Association (JTA) and the Ministry of Finance and the Public Service

After months of wrangling and a two-hour delay to the start of the signing ceremony at the finance ministry yesterday, it took JTA president Georgia Waugh Richards and Finance Minister Dr Nigel Clarke less than five minutes to put pen to paper on the deal.

"It's never agreed until its agreed, and ... both parties wanted to make sure that what we signed was what we agreed to. So we just had some last-minute editorial changes that had to be made, and, thankfully, we were able to," said Clarke as he responded to questions on the reasons for the delay.

"Suffice it to say that we just signed an agreement. What was presented to our membership was, basically, an offer, and you would also understand that it is respectful to present this to [our] membership again before going public," explained Waugh Richards.