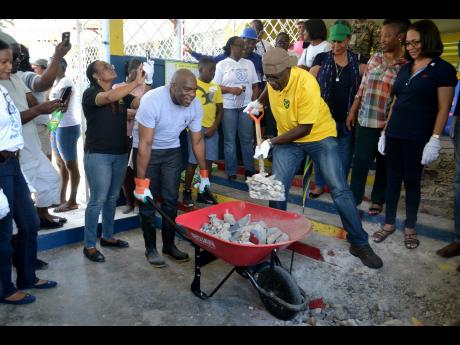 Education Minister Ruel Reid loads a wheelbarrow with waste material as Opposition Senator Dr Floyd Morris gets ready to wheel it away as work begins to erect a ramp for use by disabled students at St Ann’s Bay Infant School on Labour Day. Minister of Labour and Social Security Shahine Robinson (right) was part of the work crew.

The St Ann's Bay Infant School on Wednesday benefited to the tune of $3.5 million worth of repairs as one of the National Labour Day projects.

Representatives of several government and non-governmental organisations turned out to assist with building a ramp, mending the fence, fixing the roof, enhancing the play area, and painting classrooms and other areas, among several other tasks.

Teachers, parents, friends of the school, and community members were also out to give a hand.

Speaking to reporters, Reid said that the ministry was hoping that the St Ann's Bay Infant School would become a model institution as all children, including those with special needs, were being targeted.

"We'll be partnering with our sister Ministry of Labour and Social Security to make sure we target our vulnerable population and that all our schools across the island are accessible to all children," Reid said.

The focus on St Ann's Bay Infant School on Labour Day was part of the Ministry of Education's plan to spend $50 million this financial year to improve 126 schools across the island to benefit disabled students.

Robinson, whose input ensured that a school in her constituency of North East St Ann received special attention on Labour Day, was grateful for it.

"I believe that it augurs well for other things and other schools in the constituency," Robinson said.

"At the Ministry of Labour and Social Security, we have the responsibility for the early stimulation programme, which deals with children zero to six years old, who are physically and mentally challenged, so having accessible schools to all children is very, very important."

Senator Morris, who strongly supports the effort to implement ramps in schools, said, "It's a very important initiative and I'm really excited and heartened. What we're seeing here is Government responding to the needs of the citizens."

It was a grateful principal, Debbie Parsons-Morris, who spoke with The Gleaner.

"I'm happy for all the areas being addressed - the ramp, that's key; the fencing; the play area. To be honest, all the areas are critical and we really appreciate it," she said.