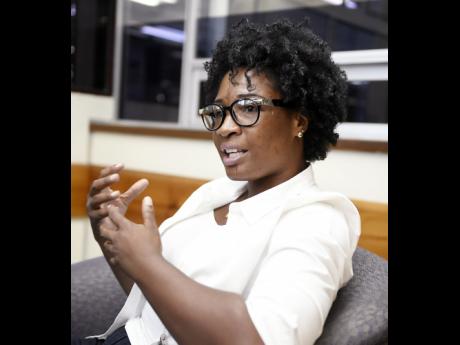 It was a 16-year-long battle, but Cameshia Gardener was convinced that she had been unfairly treated and was prepared to fight as long as necessary for justice.

The former district constable was suspended without pay in 2002 and dismissed 14 years later, but she was adamant that the leadership of Jamaica Constabulary Force (JCF) had acted unfairly and without adequate grounds.

Now the State has accepted that Gardener was wronged and that she is entitled to all the emoluments and perquisites attached to her post from the date of her suspension.

According to Gardener, her dilemma started when she was involved in an altercation with a woman in Clarks Town, Trelawny, where she lived and worked as a district constable.

She said she was neither on duty nor in uniform at the time, and they both went to the police station where the dispute was discussed. Gardener said no statement was taken from either party and she assumed that was the end of the matter.

But when she reported for duty at the police station three days later, she was told to go home.

"I waited like a week, then a month and nothing, so I went back to the station because I really didn't know if I was on suspension or just had been sent home indefinitely. I didn't know what was going on," Gardener told The Sunday Gleaner.

"Two months later, I was asked to take my ID and whatever else I had for the Government to the station. There they just handed me a letter saying I was on suspension and the matter was under investigation," added Gardener.

She said she had just rented a house and taken out a loan when she was suspended, leaving her without an income. "It was the worst thing to happen and at the worst time," declared Gardener with tears streaming down her face as she recounted her ordeal last week.

"I had just had my child, he was four months old. I had to move in with my uncle in a remote part of Trelawny. They had no electricity, no running water, and no shop nearby. I can remember my son was very hungry and there was nothing," added Gardener.

She said as the years rolled on she wrote numerous letters and made several telephone calls seeking help to get her job back, but no help came.

Gardener was especially dissatisfied with the United District Constables Association, which should represent her, as that body claimed that there was no file to show she was even on suspension. It took seven years for a file of her case to be put together.

"To be honest, I don't think the association serves any purpose. What the association actually wanted me to do was to leave it alone. For three to five years I was in contact with them and nothing," said Gardener.

Frustrated, tired, and unable to find anyone to help, Gardener took her case to the anti-corruption lobby group National Integrity Action (NIA) in 2015, based on a recommendation from a colleague.

Having listened to her story, the NIA said it would assist her as her case had a realistic prospect of success. Executive director of the NIA, Trevor Munroe, then wrote to the commissioner of police, who responded by letter to say that the matter was "being given attention".

But after a year with no action on the part of the JCF, the NIA decided to seek justice through the courts. Through its Advocacy and Legal Advice Centre (ALAC), the NIA retained lawyers and in 2016 brought a lawsuit against the commissioner of police and the attorney general.

"The law was in her favour and I fully believe you have a duty almost to enforce your right. Constitutionally, protocol was breached. This is an agency of the State, and if you can have an agency of the State doing this, it was just so gross," said Lisanne Hamilton, an attorney-at-law attached to ALAC.

Fellow attorney Tressa West added: "What motivated me in the case was who was involved, because Cameshia could have been any one of us, and at the end of the day, there was a great injustice that was being done to her. It could have been done to any of us."

With the matter before the court, the Office of the Attorney General finally admitted that Gardener was wrongly treated and should be compensated for the 16 years off the job.

Gardener is no longer interested in serving as a district constable, having moved into a job working with senior citizens, a role which she says is very fulfilling.