JSPCA forced to put down 65% of rescued animals 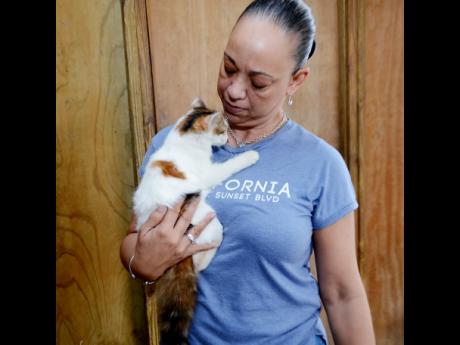 Kenyon Hemans
Pamela Lawson, managing director of the JSPCA, shows a cat that is up for adoption but says that cats are the hardest animals to be adopted.

The Jamaica Society for the Prevention of Cruelty to Animals (JSPCA) says that it is forced to humanely end the lives of over 65 per cent of its intake due to health reasons and a lack of resources.

"We are going over 7,000 animals that are coming in - cats, dogs, puppies, kittens - per annum. Some years are worse, some years are better. Out of that, we are putting down at least 65 per cent of those animals," reported Pamela Lawson, managing director of the JSPCA.

She indicated that the JSPCA was not pleased with the rate of euthanasia but argued that it was the only option because of insufficient space, the cost of upkeep, and the fact that many animals were not suitable for adoption.

"If they have good health, no heartworm and TVT (transmissible venereal tumour) - things like that - if they don't fit those criteria, we have to put them down," Lawson said.

According to Lawson, the JSPCA has a good working relationship with government entities such as the Kingston

and St Andrew Municipal Corporation and the National Environment and Planning Agency.

Citizens should do more

She also made it clear that citizens who wanted stray animals to be rescued had to do more than just call the organisation.

"I don't have time to be running up and down the streets of Kingston, running after a dog. We tell them, 'You have to help us to help you. If you can get them in an environment where they are contained somewhat, I will go there,'" Lawson said.

Veterinarian Dr Lesley Robinson said that curtailing the reproductive capabilities of animals is the way forward, and the JSPCA had been pushing this strategy through the Spay Neuter Jamaica programme.

"We spay and neuter their animals. It's interesting to see that female dogs that are traditionally put on the street, if people know that they are not going to have babies, they will adopt them and take care of them," Robinson said.