Save the youths with music! - Southside wants a recording studio to occupy the minds of unattached youngsters 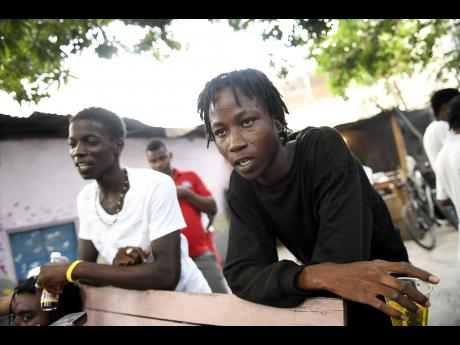 Gladstone Taylor
‘Image’ (left) and ‘Mafia’, sharing their thoughts on the positive impact that a music studio could have on their community. 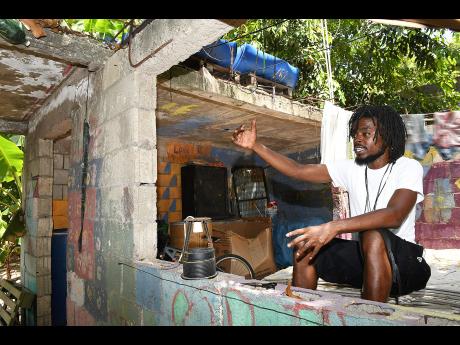 Residents of the central Kingston community of 'Southside' are confident that music holds the key that could unlock the potential of several young men in the community and move them into a path of productivity.

But the residents want the youngsters to be more than numbered among the thousands of Jamaicans trying to make it as a singer or a DJ; they want them exposed to all aspects of music through the setting up of a formal structure in the community.

"The music can help the community, yes, because me a go come round the studio and me no know where that can carry me," declared one youngster who is known in the community as 'Image'.

He told a Gleaner/RISE Life Management on the Corner with Unattached Youths forum last Thursday that a recording studio in the sometimes-volatile community would be one sure way to keep the young men occupied.

He was supported by fellow youngster 'Mafia', who told the forum in 'Mango Tree Lawn' on Tower Street that if the teaching of how to play different instruments is incorporated in the mix more youths would come on board.

"Whole heap a man would want learn music, dem just don't have the help and the support behind the thing ... and the maintenance. Because the studio will get we involved and we a go take care of it, if we know say a we it a go benefit," added Mafia.

But the answer to the calls of Mafia and Image could already be in Southside in the form of Life Yard, a community-based organisation aimed at providing positive role models and useful initiatives for residents.

Already, members of Life Yard and others wanting to give back teach youngsters in the community various skills that can be used to earn a living. These include drumming, piano, embroidery, sewing, jewellery making, and farming.

One of the principals of Life Yard, Shane Morgan, told the forum that with approximately $1.3 million they could finish stepping up a studio which they have being trying to establish but have placed on hold because of a lack of resources.

"If you check the area in a central Kingston, from me born 35 years ago, there has never been a studio in the area. The youth them always have to go find a bus fare fi go elsewhere, so you know how much that take from them.

"Every other community probably has a studio near, but nobody never really come and say mek we put a studio on the main or somewhere near this community," said Morgan.

He added that the Life Yard studio would be mandated to give back to the community with free hours at least three days per week, as its push would be to develop and mentor future musicians.

"If I get funding I could finish it in another six months and can start some workshops. I already have a proposal for a musical art workshop for audio and photography. We have volunteers with the skills who are willing to come in and do a two-week workshop with the kids," said Morgan.

No age limit on education – 43-year-old mother of four heading back to school
'Blame the parents!' - Without guidance, Tel Aviv children becoming 'shottas'
Motherless, jobless but not hopeless - Kimani searching for an opportunity
Cruel & clueless - 'Tel Aviv' held hostage by young gangsters who don't know what they are fighting for
Crime college 'Tel Aviv' - After 20 arrests David now determined to shape a different destiny