NWA warns against use of blocked Passage Fort Drive bridge 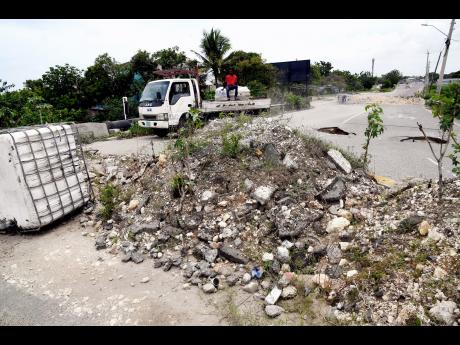 Norman Grindley
Motorists continue to risk using this collapsed bridge at the intersection of Dyke Road and Passage Fort Drive in Portmore, St Catherine, that was blocked off by the National Works Agency last year.

The National Works Agency (NWA) is again warning motorists to desist from using the defective bridge at the intersection of Passage Fort Drive and Dyke Road.

Despite using debris to block the roadway, the NWA said motorists continue to clear a path to access Dyke Road.

NWA Communication and Customer Services Manager Stephen Shaw told The Gleaner yesterday that despite warning signs urging motorists not to use the blocked roadway, many continue to defy the instruction.

He indicated that the bridge, which is severely compromised, poses a serious threat to motorists.

The road was closed in November last year when it was discovered that the metal culverts had become defective owing to significant corrosion. The heavy rains at the time had also exacerbated the problem.

Shaw said that work on the project was close to starting, but he could not give a precise timeline as to when it would get under way.

However, he indicated that it could take about six months for the work to be completed.

Motorists have been advised to continue to use Dawkins Drive, then on to George Lee Boulevard after exiting the toll road, or continue along the Dyke Road, then on to Municipal Boulevard. The reverse obtains when travelling out of the municipality.