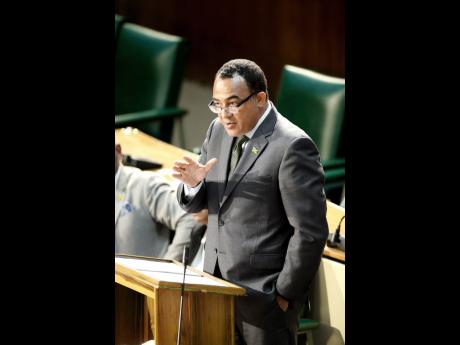 Students across Jamaica will be forced to drink healthier beverages at school starting January 2019 as a result of a ban announced by Minister of Health Dr Christopher Tufton during his Sectoral Debate presentation in Parliament yesterday.

"Effective January 2019, the Government will implement a policy to restrict certain types of sugary drinks in schools. By sugary drinks, we mean beverages that contain sugar or syrup that is added by the manufacturer ... . It does not include, Mr Speaker, 100 per cent juice or unsweetened milk," Tufton told the House of Representatives.

The health minister noted that there was evidence that excessive consumption of drinks with added sugar helped to generate non-communicable diseases. He argued that Jamaicans should be worried about the health of teenagers based on recent statistics.

"Approximately 70 per cent of Jamaican children consume one or more sugar-sweetened beverages per day," said Tufton. "The prevalence of obesity in adolescents 13 to 15 years increased by 68 per cent and doubled in boys over the past seven years," he added.

He advised that the education and health ministries would engage manufacturers and distributors in upcoming months to outline the policy guidelines ahead of implementation.

The proposed ban on sugary drinks also applies to public healthcare institutions, as Dr Tufton said that the Government needed to lead by example. The drink ban is nested in the Government's strategy to overhaul nutrition in schools, and the health minister outlined that a nutrition policy was being formalised and would govern what students consumed.

The health minister explained, "The school standards will focus not just on sugar, but on reducing the intake of saturated fats, cholesterol, sodium and sugar and increasing vegetable and fruit consumption."

He said that the policy was designed to complement the Jamaica Moves in Schools programme, which is set to be rolled out soon.