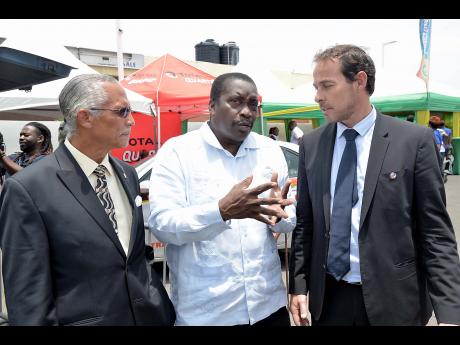 The Transport ministry is in the process of acquiring five new buses to be used in a pilot liquefied natural gas (LNG) project aimed at reducing emission and achieving greater performance on Jamaica's roads.

Transport minister Robert Montague told The Gleaner yesterday that the buses were scheduled to be shipped from China within the next 30 days.

"We are actually on the cusp of starting the process of piloting the use of LNG in our buses. We are going to use five brand-new buses so that it does not skew the results of the experiment by other factors. They will be deployed across the system, and we will be looking at the results to see how the buses perform, among other things," said Montague. He was responding to questions about the volume of emission from the Jamaica Urban Transit Company (JUTC) buses.

Montague, who delivered the main address at the launch of Road Safety Month, said that discussions had been held with the Island Traffic Authority regarding the monitoring of emissions from motor vehicles, which is pending the roll-out of the new Road Traffic Act.

"It will take a whole lot of investment and education, but we are up to the task. With the Road Safety Council acquiring two brand-new black box analysers, which have been handed over to the police, we now have the capability to analyse information from cars built after the year 2000," the minister disclosed.

"I have warned my staff and the permanent secretary to have every 'I' dotted and every 'T' crossed and not to short-cut any of the procurement process. I don't want any negative criticism. I don't want this programme to end up being a political football," he said.

JUTC Corporate Communications Manager Cecil Thoms explained that the company was aware of the concerns of the public in regard of its buses emitting thick, black smoke and that it had began retrofitting them with new fuel injectors to address the problem.

"We are aggressively addressing the matter. To this end, over 160 buses have been retrofitted with new fuel injectors, and the use of ultra low sulphur diesel fuel is now being used," he said.